It’s early morning at the Pacific Ocean. I am writing this from a table barely out of view from the scene above. A waiter just silently adjusted the position of my orange juice glass to be one inch closer to my right hand. So, you know, I don’t have to strain myself.

Where am I? At the Goldman Sachs Builders + Innovators event in Santa Barbara. Why? Goldman named me one of the 100 Most Intriguing Entrepreneurs for this year. Happy days.

There is a supremely mind-blowing aspect of this situation. Namely, that for the four years when I travelled for The Grommet on a punishing schedule of cheap travel, AirBnB couches, and general mooching off friends, I could not have scored a stay in a luxury resort to save my life. Yes, I know this is the way of the world. But still…

I am embarrassed to admit I got a little impatient yesterday with the front desk person who seemed to resist my request to print out a boarding pass. I stopped myself, realizing how easily I could move from starving founder–grateful for a free bagel–to luxury resort Guestzilla.

I’ve spent a lot of time since I got here talking to the resort staff (politely). One of the many security detail people stationed on the lawn at the Four Seasons told me he was on duty because “The client bought the whole place out.” I replied, “Well there are a lot of powerful and wealthy people here but don’t exert yourself protecting me. There are much better targets just over there.” 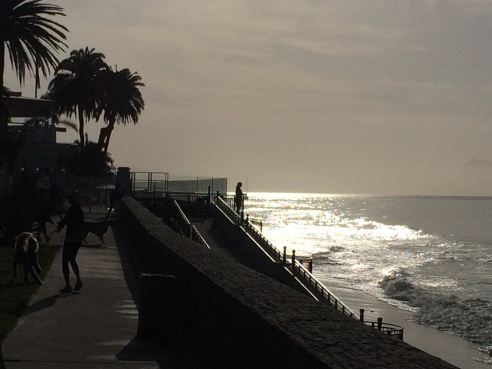 The special security force was just one tiny symbol of the massive thought, planning and physical plant improvements that went into this event. Imagine a really coordinated, expensive wedding and all the myriad details that go into to creating a magical night. Then double that effort. Then triple it. And do it in a totally quality way. And you have the Builders + Innovators event.

This Four Seasons resort is like a seaside movie set. Yet the person who checked me in revealed he had never seen the property as fully tricked out as it is for the Goldman event. Some staff members were assigned totally new/different uniforms to suit the theme. There are generous and inviting outdoor furniture groupings installed just for this summit. The meals and talks are being staged in one impressive venue after the other. 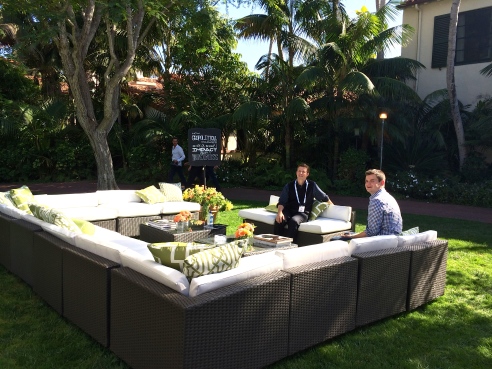 There is a full CNBC studio assembled to do a live broadcast. The Soul Cycle founders and executive team are here and they even kicked all the equipment out of the hotel fitness center and turned the main exercise room into a totally customized studio.

Sidebar: At the risk of being a terrible guest, it’s easy to grind your teeth in annoyance at Goldman for the excess of this kind of event–where they are presumably recruiting future clients (to ultimately pay the astronomical banking fees to pay for recruiting other future clients), and sparing no expense. But get this. In a funny exchange, I emailed a good friend from college who works in private wealth at Goldman (ex-boyfriend to be precise) to let him know I was hanging with “his” people in the lap of luxury. He revealed that he was meanwhile spending the night at a Holiday Inn Express in Wlkes-Barre PA, in a room with a broken TV. He negotiated to get $10 off the bill. I was shocked (he’s a senior executive) but he says this “no-star” level of accommodation is Goldman company policy. So I guess they (at least since the financial crisis) save the big bucks for clients. 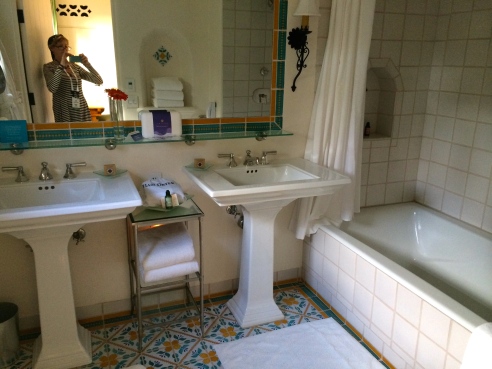 Me, taking a photo of the pretty bathroom

Despite all this fabulousness, I had to think hard about attending this summit. My travel rule of thumb is that I only attend events where I am speaking. Being a speaker is also especially efficient and helpful to an introvert like me, because in the process of speaking I save myself the aggravation of having to do serious networking. People tend to just find me, during the subsequent hours of the event.

But last year I decided I would allow myself one “boondoggle” a year if it met these criteria:

This Builders + Innovators event has all the network expansion “ju-ju”:  I “hung” with Michael Dell chatting over cocktails, had sessions and meals with the founders of General Assembly and One Kings Lane, as well as countless others who might not be quite so famous but are equally impressive. Attendees include the CEO’s of Warby Parker, Instagram, Gwolla, Polyvore, Method, Lumosity, Shapeways, Etsy, and AdRoll.

The last criteria for deciding whether to attend–will it add energy?– is the hardest one. For many people, lavish meals in a luxury hotel would be restorative. Not so for me, because they require endlessly chatting with strangers. I can fake “extrovert” with the best of them, but it is still exhausting. It is much more rejuvenating for me to be home eating a sandwich and reading a book. The travel schedule is also guaranteed to be a huge energy killer since the pace of “regular work” does not suddenly halt because I hit the road.

Anyway, one of the differences at this event from many I attend is that the people on stage are long-term entrepreneurs and not necessarily “flavor of the day.”  I will share my three favorite takeaways:

From Reed Hastings, founder of Netflix:

I’ve learned that if I am sure that I am doing the very best job I can, I can sleep at night. I can’t control many factors. That also means I can’t take responsibility for every outcome. If things go well I don’t take the credit–and it belongs to my team anyway. But when bad things happen I don’t have to take all the blame, if I know I did my best.

I found that to be a really wise statement.

From Walter Isaacson, author of the Steve Jobs biography, and just releasing his new book The Innovators:  How a Group of Hackers, Geniuses, and Geeks Created the Digital Revolution.

Hardly anyone knows the names of Ada Lovelace, who paved the way for a digital revolution, or Jean Jennings and Betty Snyder who were the lead programmers of the Eniac.  But it is fairly certain that Silicon Valley would not exist if it were not for them. Women have been largely written out of the history of the digital industry yet they were the very first, best programmers, before men realized the work was interesting and deemed it worthy.

I especially appreciated Isaacson’s statements because this event did not feature one woman keynote speaker, an upsetting fact.  I spoke with one of the organizers and she said this was an area of both focus and frustration, which Goldman intended to fix next year.

I don’t know if the bias was systemic because I never spoke with any of the bankers. It was surprising to me given that this was a recruiting event.  I figured that there would be a kind of organized swarming of the 100 entrepreneurs by the relevant-sector bankers–to learn some inside scoop. No one swarmed me, so the guys were either being remarkably laid back, or relying on their existing entrepreneur clients in attendance to chat up and surface the up-and-comers, or the banker guys all just thought I was someone’s wife.

My final delightful takeaways were from the 2-star Michelin chef Josiah Citrin of Melisse. He prepared the hors d’oeuvres the first night, gave a brief fireside chat, and then mingled with the guests. We shared battle stories of building businesses and we commiserated about the CEO dual curse and necessity of caring about EVERYTHING down to the smallest detail.

Josiah gave me the example of going in his restaurant dining room to talk to customers and seeing a spot on a guest’s white linen table cloth. The restaurant policy is to very subtly slip a white sticker over the spot so that the diners’ experience is not marred by any imperfection or sloppiness. Josiah says that when he sees such a spot unattended he can barely focus on the conversation with a customer because he is rabidly compelled to get the white sticker applied and fuming that someone let the spot remain.

I see every instance of missed punctuation in an employee email, every piece of food debris on the floor of our kitchen, every messy sample shelf in our store room, every overflowing trash bin, every over-expensive purchase, every customer lead that is not closed, every video story point that is unclear, every phone that goes unanswered. You get the point. But I was happy to know that my “condition” is shared.

After two days of the luxe life I am hankering to get home. In fact, I finished this post at the airport and below is the lunch I felt compelled to have, to jumpstart my re-entry into reality. You can take the girl out of the ‘hood but…