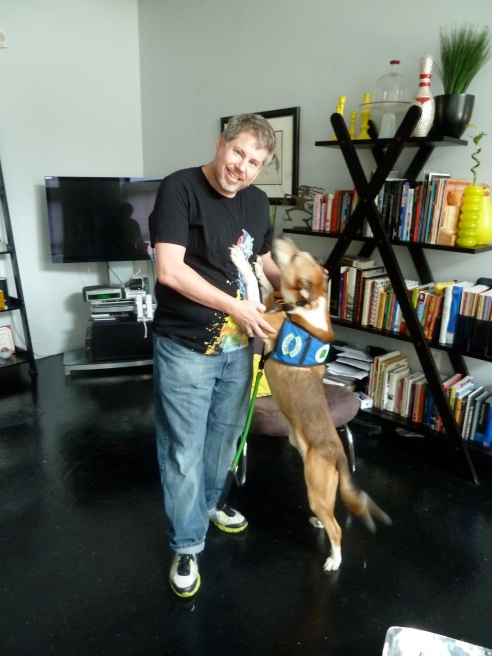 Meet Jon.  Meet his dog Pilot.  Jon’s a filmmaker. He grew up in Washington D.C.  He lives there today.  He knows all the best insider places in D.C.

Pilot’s a therapy animal.  He never barks and he likes to be petted.

Jon and Pilot live in this swish neighborhood of Washington D.C.  It is near all the coolest restaurants and tourist sites. If you were Jon’s friend you would want to stay with him because he would tell you all the best places to eat and visit.

He would tell you to go to “Paul”, a beloved Paris bakery and cafe that recently opened its first US location, just a short walk from Jon’s apartment.

The “Paul” cafe has delicious coffee.  You can sip it while sitting outside.  You can sit  in comfortable French-y chairs, next to these  fountains and be right across from the National Archives.  And if you didn’t eat it too fast to perhaps take a photo, you could savor your memory of a delicious French Apple Turnover. 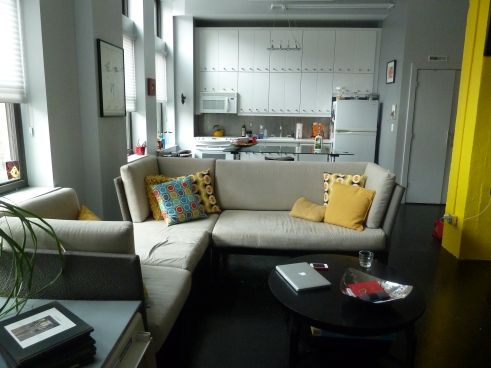 See this couch.   It also belongs to Jon.  Pilot likes to sleep there sometimes.  If you were Jon’s friend you would be delighted to sleep there.  Jon’s a gracious low-key host.  You’d be so happy to have the chance to sleep in his studio.

Lots of people like to visit D.C.  They see the sights.  They go on school field trips.  They learn some history.  They see cherry blossoms.  They might even be there for business meetings.  People look forward to these trips.  They plan ahead.  They book nice hotels.

Or sometimes they do not plan ahead.  And they have nowhere to stay.  They find bad expensive hotel rooms on offer in terrible locations.   Sometimes they can afford to pay crazy prices to get the last room in town.  But sometimes they cannot do that.  And they just wish they had a friend like Jon who lives right next to the Metro stop, only two stops from the train station.

But they don’t know Jon.  They panic.  Then they remember to check that newfangled site AirBnB.  They find their new “friend” Jon.  They read happy reviews from strangers who stayed with Jon.  The strangers write that Jon’s couch is comfortable and Jon is nice.  The strangers say they happily paid $90 to stay in Jon’s studio apartment and sleep on his couch.

And that’s what I did. And I liked it.

I slept just fine.  The eye mask from Jon helped.  It created a semblance of privacy even as he and Pilot slept mere steps away. And the Sugar Daddy made me laugh.

Free bonus: I even got to take Pilot on a nighttime walk to keep me safe.

My son, calling on the phone, during my walk with Pilot:  “What?  You are in D.C?  You are walking some stranger’s dog?  You are sleeping in the same room as some guy you don’t know?”

15 Responses to “Sleeping with a stranger: via AirBnB”