After my amusing encounter with faux pumpkin patches in California, I took a spin to pick up pumpkins closer to home, and do a little early leaf peeping (the colors are late this year, seems to me).  The Sunday drive turned out to be a pumpkin field day.

First off, check out the stems on these babies in the back of our car: they’re called Wolf Pumpkins.  Apparently it’s a newer varietal sporting mondo stalks.    These are very big pumpkins…the huge jack-o-lantern size, so the stems are positively outrageous–almost four inches in diameter. 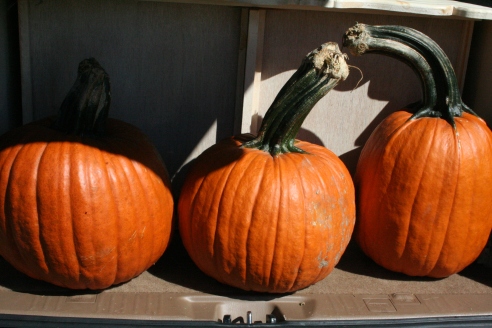 Next off, the adorable “live” marketing campaign, below,  had us stopping to buy yet another pumpkin, just as a show of support for this enterprising lad.

He was standing right in front of his house in Peterborough, NH, with a very small inventory for sale.  He either grew them himself in his space-constrained yard (I was afraid to ask, fearing he was reselling some pumpkins he got cheap at Home Depot or something), or he had a wildfire business success on his hands, being almost cleaned out.

But the pumpkin creme-de-la-creme was NOT the Pumpkin Festival in Milford, NH (lovely though it was).  No, the piece-de-resistance was one of the events at the festival:   the awe-inspiring American Pumpkin Chunker exposition going on at a nearby farm.  (In other words, catapaulting pumpkins.)  Here’s the story.  Way back last Thanksgiving, Nashua native and landscaper Brian Labrie caught a Discovery channel show about a national pumpkin shooting competition, The Punkin Chunkin in Delaware.   Winters are long in New Hampshire and the competition really caught Brian’s imagination.  He’s also apparently a guy with a lot of vision and determination.  He organized five buddies (including a couple of talented machinists among them) to conceive and build the world’s first air cannon that can shoot a pumpkin a mile.  Yes folks, a mile.

What I loved even more than the odd thrill of watching supersonic pumpkins hurtling through the air, was seeing this crazy dream come true.  I enjoy that we live in a time that these guys could do something so sophisticated and beautifully engineered in a tiny town in New Hampshire.  Surely they have a lot of native smarts, and this $100K project was no amateur job.  But the sheer availability of information and access to tools is the other half of the story.  It reminded me, on a MUCH grander scale, of when my oldest son decided to convert an old junk yard ten-speed bike into a single gear bicycle.  He just hopped on the internet, read some posts, watched some helpful how-to videos, learned where to source the parts and finesse the engineering, and he was off and cycling.

Check out the American Chunker blog to find out their next appearances and just let yourself get caught up in the project.  The blog itself is a fabulous piece of work.  Go American Chunker….our only New England team competing in Delaware!