January is a month to quietly plan, create, write and reflect. It’s perfect for an introvert like me. I’ve covered my affection for letter writing here and here. And my efforts to live sparely here and  here. Today I pulled those two things together–as explained in the text of a letter I just sent to fourteen friends.

You are getting this little package because you are one of 14 people whose letters I saved since you started sending them to me. More on that in a second.

As I ran the steps of the Bunker Hill Monument today in 14-degree weather I realized that Martin Luther King’s holiday has become my favorite day of the year. This is for two reasons. First, growing up in Detroit I had a front row seat on observing how access to opportunity should work for everyone, and how it often does not. Not at all. The holiday honors the sacrifices of so many, symbolized especially well by Dr. King’s successes and struggles. Being a white girl, my experiences with racial injustice were nil, but I got a discouraging taste of what it is like to be seen as “less worthy” in my business career, especially in raising venture capital. So mark this holiday I do. Always.

The second reason I love this holiday is because it is in the middle of my favorite month. I do love the weather—the contrast of bitter cold and cozy interiors do it for me. Snow is still welcome and novel. But I mostly look forward to January because it is so quiet. With a nearly blank slate of four weeks (I mean how many annual events happen in January?), it’s when I get to be especially creative and contemplative.

That brings me to these letters. In general I was Marie Kondo before Marie Kondo. I purge easily and regularly. But there is one major exception. Well three actually. I have a profound weakness for saving:

Specifically I saved every letter sent to me from about age 10 to about 40, when both email and a move to Ireland intervened to stop my habit.

In a 1990’s basement-cleaning blitz I oddly and singularly put my “30’s” on the curb for the recycling truck.

And two months ago I confronted the other two decades. I vowed to shed the other boxes, reasoning that if I had not read them yet, would I ever? Would I really want to sit for weeks on end in my 80’s reliving the past and being sad reading mail from (too many) dead people? What if I died tomorrow myself, never having looked at these letters? What if my kids had to decide what to do with them, knowing how important they are to me? (Yes, I am into “Swedish death cleaning” too. Look it up.)

The difficulty is I do not have weeks of time to read letters in my 50’s. So I spent a frantic one-hour combing through my boxes of letters to pull out samples from the people who wrote me most often. I put the chosen letters in a box about the size of a four-slot toaster. I had to do this work with lightening speed—to take advantage of a very brief window of steely mettle and courage. I put the big copier paper boxes (containing 99% of my teens and 20’s) in the building recycling area. I walked hesitatingly by them a few times and almost grabbed them back. I kept peeking if they had been taken. But I ultimately left them for an indifferent maintenance man to toss, unaware that he was jettisoning half my life’s correspondence.

Still traumatized, this month I read half of the remaining (chosen) letters.

That half is now heading in fourteen different directions, being returned to their original senders. I enjoyed reading them so much that I decided to hang onto the rest for some day in 2028 or so.

A friend told me I should not have purged the letters, saying, “They are history.” That made me feel even worse. Well having read our correspondence, unless descriptions of weather, crushes, travels, classes, boy/girl troubles or gossip are truly history, the world will keep turning without these letters.

What is far more interesting is to see how my friends and family were (mostly) already themselves as early as 12. Raquel was ambitious and did not suffer fools—at all. Donna was coolly apprising, and thought everything was too expensive. Denny was loving and hilarious—and drew some incredible micro cartoons. Lisa aged before my eyes but always had her goofy and creative sides. Claudia was thoughtful and attentive with a relentless work ethic. Kathy was humble and sweet and so honest about her life’s perambulations—including her first encounter with bagels and lox. Marg was deeply passionate about her work AND her play. Ted was as grateful as a Labrador retriever. Laurie was steady and true but also spicy and feisty. Lori was dramatic and insightful and full of plot twists. Anne C. was richly descriptive and truly game for life’s adventures.

There’s so much more to say so I left some notes on the letters before I sealed them back up.

My predominant reaction in this exercise was to be like Ted—grateful. The warm support I had through those two important decades was palpable. My other reaction was to marvel at how much we got done with letters. Some of it was practical. For instance, Claudia and I carefully plotted the thrift shop stocking of our college apartment. Some of it was connective—Anne made me feel like I was in France with her. But the biggest reaction was that the letters were like food—emotional food. People (like me) who do not always express their affection did so easily and well in their letters. I marveled at the maturity and perspective everyone had for the importance of these letters and the relationships behind them. Thank you.

Stay tuned for “round two” in ten years or less. 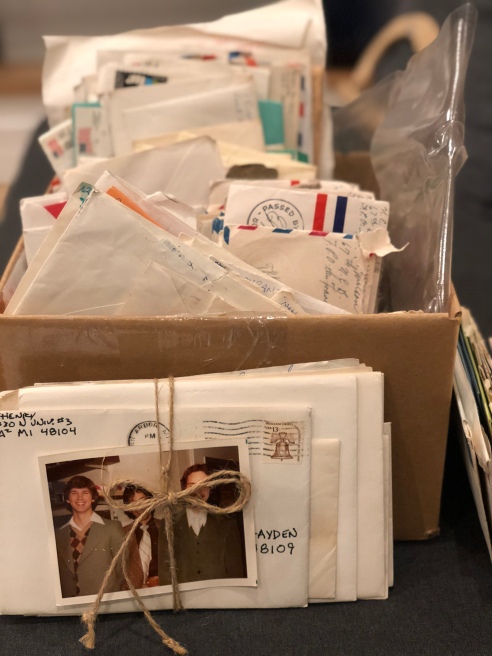 Box of letters I saved from the purge.

3 Responses to “January is the best month”