Grommet team and alums at our 7th birthday celebration

In my work as an Entrepreneur in Residence at Harvard, I meet with eight separate student groups twice a month. Most of the sessions focus on the students’ early stage venture or idea. A minority are broader discussions of what it is like to be an entrepreneur.  I was stopped in my tracks this week by one simple and fresh question:

When you started Grommet did you think it would last twenty, thirty or even fifty years?

The honest answer was that in 2008 I was so focussed on putting one foot in front of the other to get the company born, that I never thought about lifespan a whole lot.  But if I had, I would most definitely have hoped, if not expected, to build an enduring company.

Seven years later–YAY!–I am more firmly committed to this goal for the simple reason that if Grommet suddenly disappeared, it would hurt a whole lot of young companies today, and the world would never hear from thousands of future companies that deserve our support.

So on the happy occasion of our seventh birthday, we pulled some impact stats together to show what The Grommet team and community have already done.  I can’t wait to see what these numbers look like on our 10th and 20th birthdays! 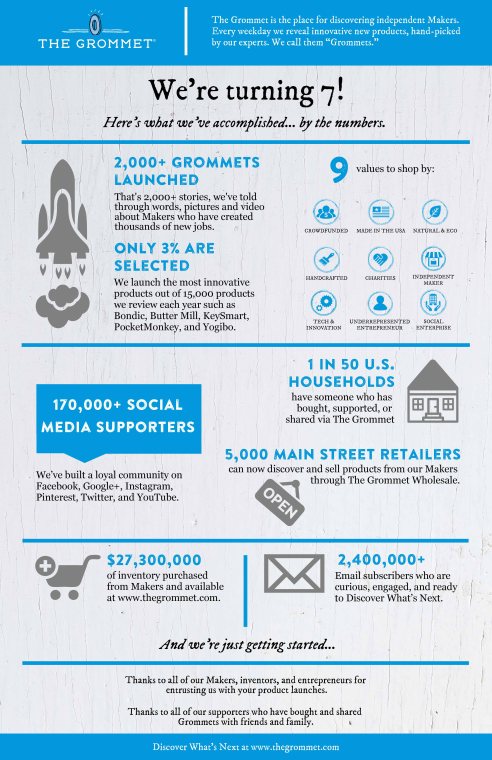