On the Friday that our Rakuten investment closed, It was formally concluded with a simple “the Eagle has landed” email from Wai-Yan Sun, the Rakuten USA CFO.  She wrote:  “The transaction is now closed.”  Five small words for a woman, one giant leap for Grommet.

With my high school buddies, a few hours after the financing closed

That night I celebrated at my house with four good friends from high school. I made them dinner and we drank an impressive amount of wine. But I didn’t even tell them about our investment (and my unnamed investor—I could not talk about the deal) until sometime after 1AM.  Their life stories were too hilarious to interrupt and I was just happy to be so happy.

The next day, a Saturday, I sat on the couch in my PJs for about eight hours.  I rarely sit more than eight minutes at home, at least before 9PM. I realized I was doing something simple and special…I was breathing.  I don’t think I fully breathed for four years.

Readers of this blog know that I like to tell true tales of my entrepreneurial experience, which are not always glamorous.  Like stories about sharing a bed with another CEO to save money, getting bird shit on my face before a VC presentation, and what it is really like to get your picture in the New York Times.

Carrying on in that tradition, here is a little photo essay to document some of our 2012 journey in securing our first big financing. 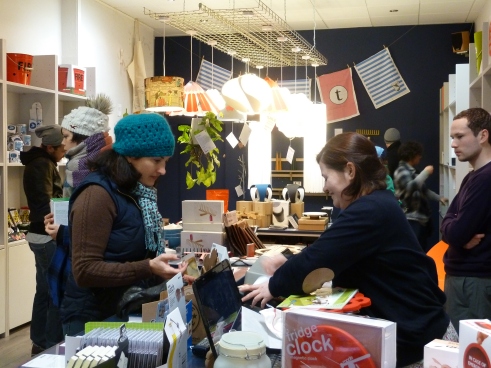 January 2012, Dublin.  After a hellishly demanding holiday season, where Joanne and I personally took customer calls for weeks, we were delighted to be flown over to Ireland, on an expense paid trip. We were asked to source Irish products for Grommet.

Joanne and I hiking at Glendalough, Co. Wickow Ireland

Joanne and I rarely travel together and this was the first business trip we ever took that was not a total grind.  So far, 2012 was looking pretty good. 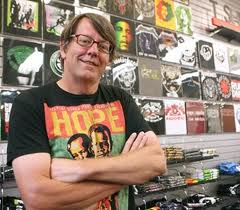 We happen to consult with Mike Dreese, the irreverent CEO of Newbury Comics.  He says, “You guys are like the PR firm that forgot to charge your clients. You are driving way more value than you are getting paid for. You need to fix that.”  So we decided we were going to do that.  This year.

We analyze the “Grommet effect” for our past partners and quantify the results.  Then we use that data to do some hard thinking. One of our team members, Julia Kemp, completely reworks our commercial terms, and she single-handedly strengthens our business model and partnerships.

Me, with the results of testing the Cookina Grommet: a brilliant mat for your BBQ

Despite being very leanly staffed, we continue to launch one Grommet a day.  We fight hard to maintain quality. We do relaunches of older favorite Grommets, communicate incessantly with our partners. The weeks are very long when you are juggling launching a new Grommet every day and keeping 800+ partners informed.

Me, with lots of Grommets

To keep the maximum cash working in the business, Joanne and I stop paying ourselves for several months, which comes on the heels of some pretty lean years.  That might not seem like a big deal, but in our households, with six sons, mortgages etc. it is very painful.  (When the funding is announced, one of my sons says, “We don’t have to sell our house?”  Clearly my efforts to insulate them from the strain failed.) 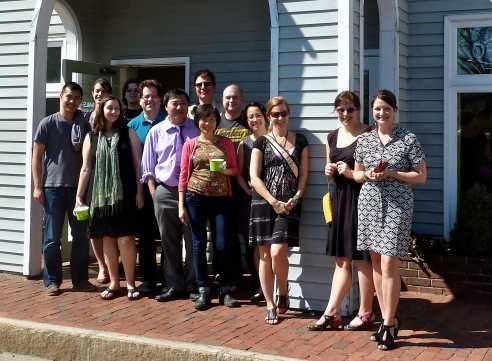 Here is the Grommet team, grabbing the chance to celebrate Ray’s birthday on an unseasonably warm March day.  Frozen yogurt for all.

In May, we have an offer for acquisition.  It’s an excellent company, but not a great deal in terms of strategic alignment.

I keep pushing, knowing we can do better.  I also know we are working on a very disruptive business and it will take real vision to appreciate what we have built and to know what to do with it.  In our travels, true vision seems thin on the ground, or else I must really suck at explaining ours.

And then….we begin talking with Rakuten.  (Cue happy trumpet sounds.)  They get it!  They get us!  Rakuten’s been over in Japan executing against a very similar vision for 15 years, albeit expressing it very differently.  Rakuten built a $4 billion business out of leveling the playing field for their merchant partners, just like we do for our manufacturers.   Every word out of their CEO’s mouth just makes sense to me.  He’s in this for the long haul, and he appreciates the vision behind Daily Grommet in a nanosecond.  His team does too.

Hiroshi (Mickey) Mikitani, Founder and CEO of Rakuten.  70% of Japanese consumers have a Rakuten account.  Mickey is a demigod in Japan.

We advance the Rakuten conversation through a very difficult personal time for me.  My family was going through my Mom’s final months with Stage 4 colon cancer.  I mention this because as CEO you really don’t get a choice to slow down around personal tragedies, health crises, or loss.  There is no one to back-fill for you and it would be unfair to suddenly expect that of anyone, even your co-founders.  In our case, Joanne is consistently making sure the ship is on course, and it is my job to make sure that there is fuel  (i.e. money).  That division of responsibilities is critical, and I owe it to her and the team to always persevere,  just like they do.

My six month pregnant sister showing my mom an ultrasound scan of her baby, three days before my mom died.

However, I am still a human being and the world seems very cruel during this time, given that my youngest brother died less than a year ago, and two close family members get scary medical diagnoses this year too.  I push through frequent visits to my hometown Detroit, my mom’s hospitalizations, and being there for her death. 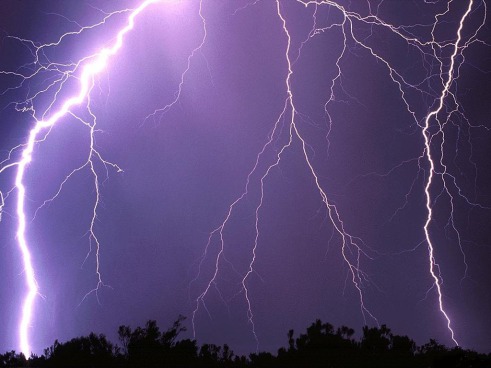 I was staying with my oldest childhood friend during my mom’s last week on Earth.  At the exact moment of her death a violent Michigan hail and lightening storm wakes me up.  I get out of bed and watch it from a giant two story window view, while my friend’s thirteen-year-old son, also awakened,  joins me.  I then get the phone call from my aunt with the news that my mom had passed.  A few minutes later a Rakuten Letter of Intent (to invest) appears in my email inbox.   I will always credit my mom with kicking up some dust and working divine intervention on this Rakuten deal.   I can clearly picture her up in heaven saying,  “Hey guys, my daughter deserves a break.  Get that Rakuten deal done NOW!”

Members of the Rakuten diligence team with four of us at Grommet.  They flew over at a moment’s notice and worked round the clock.  They even tested a Grommet!

With the LOI in place the prodigious amount of due diligence begins.  It’s a bit intimidating to have these five strangers show up and camp in our funky office, but they quickly put us at ease with their skill and professionalism and winning personalities.  However they were INCREDIBLY thorough.  I later told Rakuten CEO Mickey that he could rest assured there are no skeletons in the Grommet closet, because his team would have found them.

Rakuten is a large public company in Japan.  With a $14 billion market cap, you can expect that board governance on new investments is not casual.  As such, once the diligence is completed, the next hurdle is board approval.  On the day of the key board discussion, our main contact at Rakuten, Tomo Torin calls me late at night to tell me that we got the OK.  It makes me feel really great to hear the sincere relief and happiness in his voice…I think it might have almost matched my own.

I am out of town at the time of the Rakuten board approval, so I send the team an invitation for a GoTo Meeting video call the next morning.  Everyone on the team is hanging with baited breath to hear the outcome.  Our software developer Dave responds to my no-details meeting/announcement invite: “Talk about a cliff hanger.”

I stay up half the night, both stunned, and thinking about how to possibly capture the moment when I tell the team the big news.  I land on Bruce Springsteen’s song “No Surrender,” and the fortuitous coincidence that The Boss and the E-Street Band are playing Fenway Park in just a couple weeks.  So, I start the 9AM call with the team by playing this song and telling them that we can now move beyond “No Surrender” and enjoy “Glory Days.”

I buy the team nosebleed section tickets to go see Springsteen.  That day I tell a young grad interviewing for a job at Grommet about the upcoming team outing.  Of course,  I want her to think we know how to have fun.  She slays me with her response,

My mom would be so jealous.

Whole team at Fenway,  except Dave and Jesse were MIA at the time we snapped this.

As things turn out, our celebration of the financing is parsed out in a few mini-celebrations but the Springsteen concert is a centerpiece.  We get tanked up and rock out together.  It’s very cathartic.  At least for old people.

We have the T-shirt to prove it. 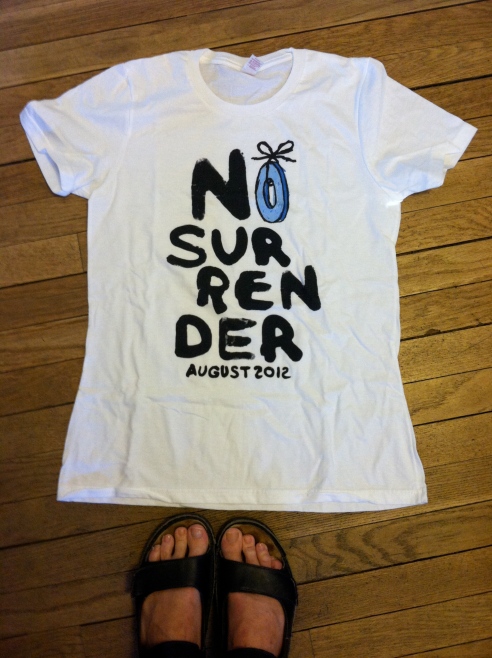 After the wire transfer clears, Joanne and I write and sign a personal letter to all of our Grommet partners (manufacturers), most of which accompanies a check that pays 100% of any outstanding AP balance.  Kate snapped a photo of me signing this stack of letters, because sending that mailing out almost means as much to us as having funds to build our business.  After all, at the end of the day, our business success depends more on creating success for our partners than any other factor.

Me, signing letters to our Grommet partners.

When we last saw Mickey on a visit to Grommet, he said, “Work hard.  Stay in touch.”  No problem Mickey, no problem.

Boy do I look like a fangirl in this photo. But it’s genuine.

Despite the demands of the Rakuten diligence, we’d put a ton of wheels in motion before the financing closed so we hit the ground running the very day the wire transfer hit.  The team did a month and a half of work in the first two weeks, and we scaled from 19 to 29 people in the last four weeks.  Everyone says the real work begins once the check is in the bank.  I still say that is when the FUN begins. (Ask me again in a year if I still say that.)  We never even had a “Careers” page on our site before, and we are all loving what that represents, in terms of our future.

P.S. September 29, 2012:  Here’s a wonderful post-script to the above.  During the time I was writing this, my sister gave birth to a beautiful baby girl named Wren.  (I hopped on a plane from Boston to San Francisco when my sister was already in the labor and delivery room.  I flapped my arms HARD the whole way, and I made it to the birth on time.)  It was such an honor to see little Wren Marie take her first breath!  I knew I was representing my mom and brother in welcoming her to our family.  Bittersweet, but still such a happy, happy time.

Me, with Wren at one week old.