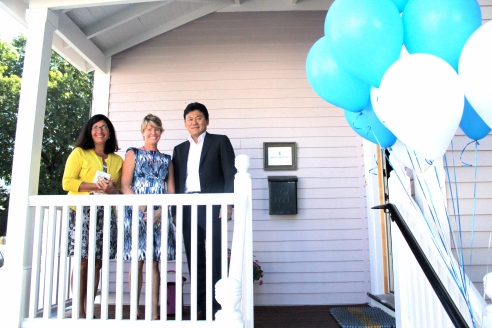 Pinch me please.  Being able to announce that Rakuten made an investment in Daily Grommet is a dream come true.  If we travelled the world (and sometimes it seemed I did) we would pick this exact investor over all others. A Japanese internet giant, Rakuten is like our twin separated at birth, because their 15 year mission of empowering small to medium businesses totally overlaps with Grommet. The Rakuten tag line for its US business says it all: “Buy from people, not the internet.”  I wish I’d thought of that!

In a parallel move, the CEO of Pinterest chose Rakuten (among many contenders) to lead their $100M investment round four months ago. When I asked Ben Silbermann about his decision, he said, “I wanted to work with operators.  They are giving us a lot of room to succeed and I deeply respect Mickey and what he has accomplished.”

“Mickey” is the CEO of Rakuten.  Also known as Hiroshi Mikitani.  Also sometimes referred to as the Richard Branson/Jeff Bezos of Japan.  Mickey is a former investment banker and Harvard MBA–and one of the youngest to ever be given the top honor of the school, the Alumni Achievement Award.   He set out to create a company that would really make a dent in the universe.  (Watch this video interview to get a sense of the man.)  Mickey has a deep-seated commitment to his mission to build the largest internet services company in the world.  As part of that goal, he converted the Rakuten internal corporate language to English in 2010 (and got a lot of flack for it from some corners in Japan).   2012 marks the year that Rakuten is aggressively going global, with investments like Pinterest, Grommet, the acquisition of the Canadian E-reader Kobo, and Wauki.tv the Spanish Netflix.

Rakuten roughly translates to “optimism” and Mickey told me that his model of a marketplace, which gives even the tiniest merchant a platform to present themselves professionally and personally, was initially viewed as crazy.  People thought he was giving up too much control and taking too much risk in letting people run their shops however they chose on Rakuten.  But Mickey told me, “I believe in the goodness of people to do the right thing.”

I am so glad he believes in me, Joanne, and our team, to do the same.

Kara Swisher of the WSJ’s All Things Digital broke the news today.  Here is her piece.