My oldest son is a minimalist.  He lives very frugally both by choice and necessity.  So it is no wonder that he has spent part of this summer re-reading Walden Pond and physically retracing Henry David Thoreau’s footsteps.  He took me on one of those  journeys on Sunday.  It was magical, and inspired some interesting conversation around what it would mean to live a Thoreau existence today.

As you know, Thoreau lived in an isolated cabin in the woods near Walden Pond in Concord, Massachusetts.  His stated goal was to “live brutally” and to “front only the essential facts of life”.   A newly built railroad line from Boston to Fitchburg travelled right along the shores of the small pond.  I was very surprised to learn that Thoreau was actually pretty sociable,  and he walked the two miles or so to Concord center quite often, availing himself of the flat, cleared off train tracks.   On our re-enactment, Dane and I traced his route to town, but to avoid the relative boredom of a return trip, we stashed our bikes in Concord center so we could cycle back to the pond.

I’ll start with our little photo essay and end with the new thoughts inspired by the journey.

We left our bikes in town and then drove to the Pond to begin our walk. 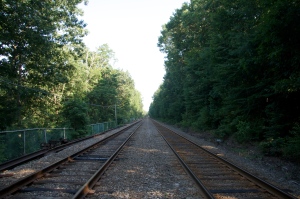 The railroad route, more or less as Thoreau experienced it. Dane commented, "It's an interesting walk because where you are stepping is so monotonous and it makes you more aware of what changes around you as you cover ground."

A little glimpse of the Pond from the train tracks. Here is one of Thoreau's illustrations of a more "consciously-constructed" life. Train tickets were expensive at the time. Thoreau pointed out that he could walk to Boston in less time, and with more pleasure, than it would take to earn the money to take the train. It was exactly this kind of decision that he made at every juncture during his two year experiment.

Commuter trains still travel the tracks. We were also passed by a jogger...an odd place to run, I thought. However, in this area of the country I can imagine that runner is probably a Thoreau scholar, channeling his hero on his daily route.

Even on the short walk (two miles, appx.) it was easy to transport ourselves to Thoreau's time.

And then we would see totally contemporary artifacts and return to the present. This graffiti was actually pretty beautiful.

One graffiti artist's homage to Thoreau

Concord center--which would probably be unrecognizable to Thoreau--but still manages to be a charming example of a fairly uncorrupted New England town center, with the requisite town green, steepled churches, and an historic inn

We rode our bikes back to the Pond, which would be completely unrecognizeable to Thoreau. It is totally overrun on hot summer days, and there is an elaborate traffic and parking management system maintained by the state parks system

With the bikes loaded back in the Rambler, we set off down the road, still chatting about Thoreau. I'd learned a lot from my son, and found the notion of Thoreau's grand experiment less intimidating and more applicable to today than I imagined.

So we tried to apply Thoreau’s thinking to today, and our own lives.  Start with the basic facts of his living in a cabin and performing just the minimal amount of paid work necessary to fuel his existence.  In his case, that was about 30 days a year of odd jobs.  For everything else he was self-sufficient. What would be the modern day equivalent?  I mean in terms of degree of “sacrifice” and the extent of deliberate change from current norms, in order to pursue Thoreau’s exhortation:

Dane and I puzzled on this when I said I could imagine a future when I lived very simply, and crafted something Grommet-worth for a living.  Similarly,  my scientist friend Andy and I agree that being a letter carrier is a job we’d both aspire to in some simpler version of our futures.  (Not now, but after we play out our current endeavors.)  Dane said that would actually be a much bigger leap than Thoreau ever made.  Here’s why:    Thoreau’s contemporaries and neighbors in Concord were mainly farmers.  So, on balance, the degree of separation between his life, providing for his own needs, was not that disparate from the rest of his local society.  That basic notion was a revelation to me.  So when my friend Frank changed from being an HR executive to crafting half-scale reproduction Les Paul guitars, he was making a more radical change in his life than Thoreau!

We also chatted about the decisions one would face today, in truly paring back to the bare minimum.  OK–you eliminate a mortgage, and any other significant property,  and any recurring obligations like memberships, loans etc.  But after that, what about a car?   Or how about a computer?  Dane theorized that Thoreau would have actually owned a computer.  He was a pragmatic guy who employed modern tools of his time, and he was, after all, a writer.  His idea of independence did not necessarily mean sacrifice for philosophy’s sake.  It just meant keeping things simple.

I told Dane about one Grommet customer who is disabled and finds a computer essential to supplementing her family’s income, in searching for coupons, freebies and sweepstakes.  She does not necessarily live sparely by choice, but the computer allows her independence, and in that way is possibly  a Thoreau-like use.

My perspective changed a lot on our journey, regarding Thoreau.  The walk to town was a flat two miles or so, and easy to do.  He was not nearly as isolated as I had imagined.  And the separation between his chosen existence and that of his local neighbors was really not nearly as dramatic as I had imagined.  But it WAS thoughful, purposeful, and well-examined.  That is, after all, the hardest part.

One Response to “Retracing Thoreau’s steps”