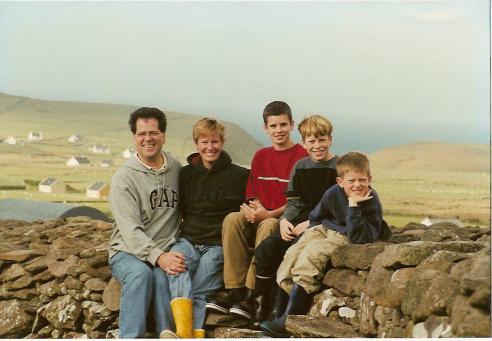 My family, in a fort on Dingle Peninsula, when we lived in Ireland

I had an unusually sociable weekend.   It surprised me how the three consecutive late nights, and all the new, interesting people I met–and way too much good food and wine consumed–relaunched me.  (I usually use my weekends to gather energy for the next week’s work, as well as complete the last week’s ‘to-to” list.  Dull but true.)  After the whirlwind of the past few days, I  found myself saying,

I haven’t had this much fun since I lived in Dublin.

And then I remembered exactly how much the sheer assault of new people, places, and experiences fueled my creativity and zest for life when I lived in Ireland.  You don’t have to move overseas to have this, but being an expat creates a unique version of what I call “extreme living.”  I had almost forgotten what that phenomenon is like, in the throes of building a company.

So, in the spirit of St. Patrick’s Day, I am sharing a little string of stories about Irish sociability.  I wrote this and sent it home to friends and family back in 2003, during our second of four years in Ireland.  This set of anecdotes actually has to do with Christmas, but the core thought–how Irish people can make a shared sociable event a true art form–stands for any day of the year in that wonderful country.  Here goes:

•    When lunch is not just lunch; where do the Irish get all their energy?

Last year Des and I were invited to the Accountancy Society annual Christmas lunch.  Our hosts, Fiona and Owen, warned us to clear the decks.  So, I arranged for a babysitter to pick up the kids, cancelled my consulting gig stuff, and Des freed up his work calendar to 4:30  He figured he’d be back well in time to finish up the day.  We arrived at noon and Des sheepishly made exiting moves four hours later, when the onstage entertainer was still cracking up the crowd.  It was obvious that the event was only just getting rolling.  I stayed until the limit of the babysitter’s availability, just when our hosts were organizing the second and third venues for the evening.

Having been such party poopers, we were surprised to be invited back again this year.  We made sure we were totally free and planned to go with the flow, despite the fact that that superb Irish talent is still merely learned behavior on our part.

The male guests were an assembly of pretty serious financial industry professionals:  venture capitalists, entrepreneurs, and bankers.  Yet each man was grinning ear to ear as he, in turn, told me, “Isn’t it great it’s December?  I just love Christmas!”  Sean the financier told me about his affection for all the holiday decorations, how he watches all his favorites go up and how he mourns their disassembly.  Charlie the venture capitalist told me how this event (typically around December 10) is always the official start to his holiday season.  He basically knocks off work from then until January 6.

The 1,100 strong assembly of revelers was well primed for the arrival of the day’s entertainment.  I thought the best line, delivered by prominent Irish comic Tommy Tiernan, followed his remarking on how irrational it is that the Irish are so proud of their nationality.

You’d think we had some choice in the matter.  Like we’d actually selected  being Irish off a list of possibilities.  But if we did, it would have boiled down to picking the place requiring the least amount of effort and offering the most amount of craic.  [fun]  Hell, if we could stand the heat, we’d all be Mexicans.

Many of Tiernan’s jokes centered on Irishness (Would an American comic have such rich territory?  What would he say?). At the end of the act the other guests asked me how Tiernan would play in the States.  I told them,

He’d play extremely well.  But in a business event,  like this, he would be marked down for all the extraneous foul language.

This seemed puzzling and I was asked to explain.

“Well, growing up in America, we’re often taught that constant swearing is a sign of an underutilized intellect, or a lower class, or an incredibly rude person.”  (Sounds very prim in the re-telling, I swear it was funnier at the time.)

The questioners seemed briefly stunned, but took the revelation in good humor.  Des asked one of the other guests what he would do if he heard one of his kids swearing.  The response,

I would f—ing kill him!

(Give me a few more years in Ireland and I’ll be eliminating the dashes.  But my mother is going to read this…)

Anyway, as expected, the lunch morphed into dinner and moved into the deeper ends of the evening.  Impaired capacities did not stop each and every one of our 10-strong party from making a huge effort to be sociable, to keep the jokes and stories rolling, to maintain the craic.  One particularly colorful guest explained to me why he had gone to such ends to secure the group a large table in the comfortable hotel bar when we were being booted out of the banquet facilities.  (I think some bank notes exchanged hands.)

Well, you know we were having such a fine time and it was such a natural thing and everyone was in great form.  You just can’t let that kind of thing die.  I had to make sure we could keep it going

That dedication to craic, as an end in itself, is such an Irish thing.  Conversation is upheld as a valuable living entity, deserving of top priority, and given whatever nutrition required.  These concentrated, organic efforts really build to a crescendo at holiday time.

So back to the notion of Christmas is for adults.  At the top of the evening one woman mentioned to me that her plans for Saturday included a full day of Christmas shopping.  Brenda seemed quite concerned about the prospect of having nothing under the tree, given that she hadn’t bought a single present for her three kids, and it was already the third week in December.  About the middle of the evening I mentioned something about my own Saturday morning plans.  This woman, having fully kept up with the boys, glass for glass, slurred back to me,

“Saturday?  I’m canceling Saturday.  You should too.  Tomorrow is strictly a duvet day.”  So much for Santy and the kiddies.

And I loved it.  You would have to be a stone not to.

3 Responses to “Here is the best thing about Ireland”