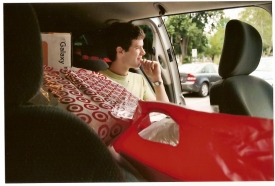 The day before we left our newly minted college freshman son at university, we made the ubiquitous Target run in his chosen city, Pittsburgh. Even in a lifetime full of rich and sundry retail experiences, I never had an in-store visit that was so powerful and so….so….homogenous. Built right on the very site of the famous Homestead steel strike, the Target was chock-a-block full of families that looked just like ours. Doing exactly the same thing. Experiencing pretty much the same emotions. Parents exchanging sympathetic glances (and surreptitiously checking out each others’ carts) and students exchanging sympathetic eye-rolls or terrified deer-in-the-headlights looks (in the case of the freshmen). Not even Christmas can inspire such a collective retail experience. (For example, at Christmas I might be buying a Peggy Lee CD for Aunt Bea next to a man buying racy lingerie for his girlfriend. Those purchases, and attendant emotions, have nothing whatsoever in common.)

Middle-aged moms and dads filling–and I mean filling–shopping carts with anything for which their son or daughter showed the slightest passing interest. We were loading ours to the brim with the best of them. I’m not typically an indulgent parent in the shopping sense, but on this occasion, all bets were off. I think every parent in the store had the same thought, “24 hours from now I am history. I am going to do anything I possibly can for this kid of mine.” (My husband commented, “Good thing Target doesn’t sell Ferraris.”)

Turns out we have a nation full of people contributing to this collective parental shop-fest. Businessweek reports:

The National Retail Federation predicts that back-to-college sales will increase 9% over last fall, to $956.93 per student, or $47.3 billion overall—the most since the organization began tracking such spending in 2003.

I’m simultaneously proud, honest, and embarrassed to say we did our part. See photo.