There are studies proving that men have a greater sense of personal potential when they work in companies with gender-diverse leadership teams. Those findings seem counter intuitive–why wouldn’t men generally agree with Warren Buffett, who says one reason he succeeded was “because I only had to compete with half the population.” A male colleague fleshed the study findings out for me: “Jules, just having men at the top is not necessarily in itself encouraging. A bunch of guys might all be cut out of the same cloth–golfers, or from a certain background, or school. Once you see women in the C-suite, it feels more fair, more permeable.”

This general notion was expanded in a recent Boston Globe piece. Kevin Cullen reported, “When Charlie Baker watched Linda Dorcena Forry, the state senator, take over the St. Patrick’s breakfast/political roast a couple of years ago, it had a profound effect on him. ‘I thought that if a Haitian-American woman could run the St. Patrick’s breakfast, then a Republican could become governor of the Commonwealth.‘” 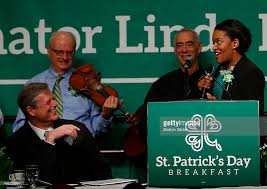 When one of my sons was considering a recent job offer at a company with an all-male leadership team he told me “I see that homogeneity as a risk factor in this company.”  He thought the company might limit its own success. It made him pause a bit. But that is my son…maybe he’s been brainwashed. Thus I was especially happy to see a prominent public figure like Charlie Baker acknowledge that his own ambition was fueled–not threatened–by someone breaking boundaries.

It’s so fundamental in America to assume that the pie can grow, rather than success being a zero sum game. Our youth and our best politicians already know that, current Presidential race aside. Alas, when you look at the leadership demographics, American business leaders have a long way to go before they catch on.

2 Responses to “Why a black, female senator is part of the reason Charlie Baker is Massachusetts Governor”