Waiting on the dock of the bay 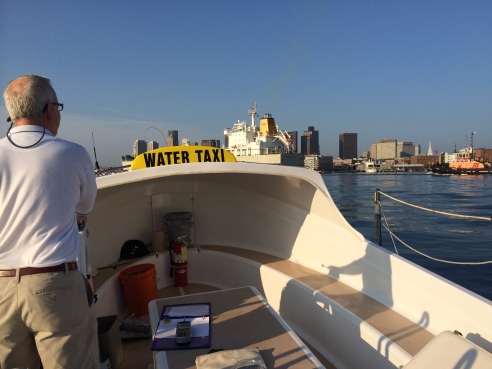 View from inside the boat, on the way to the airport

For more than a year now my primary means of transport to the airport and train station has been a water taxi. I usually end up feeling a bit like James Bond because the boat pulls right up to a dock at my apartment and there is rarely another passenger onboard. I usually chat it up with the captain and have found their stories rich and varied. So I started capturing them.

Meet the captains of Boston Harbor.

Meet Maury. He’s been a water taxi captain for a year. Maury’s on a slow burn plan to eject himself from his full time work as an IT manager for a large health care company. “My day job is too nerve-wracking,” said Maury. He decided that as he ages he wants to be doing work he truly loves. Maury realized his true passion is for the water. So he does weekend work for Boston Harbor Cruises as a path to that retirement gig.

I’d guessed from Maury’s accent (or lack of a Boston one) that he was coming at the role from an unusual path. It turns out he grew up in Los Angeles and his tech work took him to settling in Atlanta and Miami before he came to Boston in 2008.  I asked about life on the water and if it felt like a job. Maury quickly asserted “No.” He allowed that the commuting, paperwork, and carving out the time for a shift is of course a commitment to a job, but once he gets on the water it does not feel like work at all. He just misses his German Shepherd-Chow mix dog, but the rest of his seven hours on the harbor are pure joy.

The Manager: Captain Mike, a.k.a. Sully, a.k.a. “the happiest guy in the world”

As I boarded Mike’s taxi on a glorious April morning, I commented “Everyone wants to be you today.” He replied, “Just today?  I thought it was every day.” And as we talked I started to buy that theory. Mike’s joined the ranks of Boston Harbor Cruises captains less than a year ago but he was already promoted to manager of the captains. I asked how that happened so quickly and he said, “Well I stayed on all winter, just kept showing up doing what was asked, and they liked my people skills.  I feel like I died and woke up in heaven, with the best job in the world.  What could go wrong, driving a boat around all day?  You won’t go rich doing this but it’s just fantastic.”

Mike went on to tell me that his most recent job was in environmental services, working on reclamation sites. “I’m no tree-hugger but I like to do my bit. But that was a young man’s game.  Climbing in and out of manholes, hauling heavy stuff.” Mike told me he’d always been around the water, ran a boat yard and a marina, and that he has salt in his veins.  “When I saw the posting for this job I grabbed it. It was the best decision I ever made.” 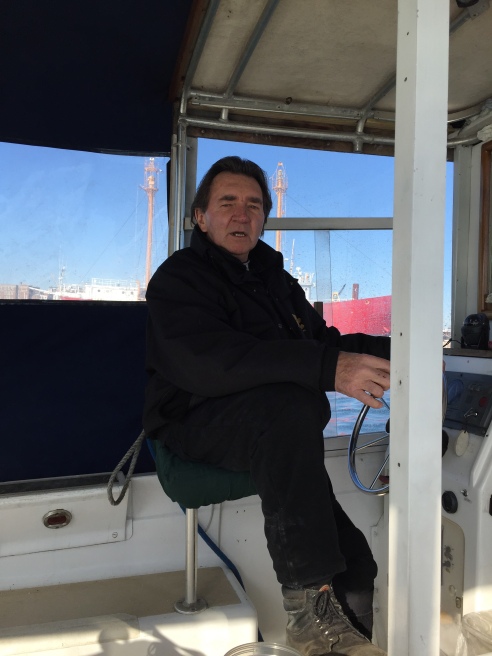 I learned Tom’s story by asking him a simple question about a new marina we passed, under construction. I was curious about how the giant black pilings get driven into the harbor floor. Tom turned out to be an expert at marine construction, having graduated college as a civil engineer.  His first job was being part of the design and supervision team for the gorgeous Newport, Rhode Island Harbor bridge. I was taken with Tom’s perfect recollection of the bridge’s dimensions (loosely recalled by me here), “The bridge’s towers were taller than the 500 foot Prudential Tower building. The pilings were 30 foot H beams, driven 120 feet down and connected to 350 foot towers that held up the bridge.  It is 3.5 miles long, which is the same as connecting Logan Airport to Long Wharf, then back and then returning again a third time.”

Tom went on to tell me about his various entrepreneurial ventures, which included buying his first marina at age 26. He went on to build a second, large marina complex in Fall River. He acquired the land in 1973 and added breakers, a full service 150 boat marina, and a restaurant.  All in all he employed 20 people in that venture.  However, Tom has been embroiled in complex litigation with the state and city since 1985, when they took the marina by eminent domain, paying Tom only his original 1973 land costs. He was so angry that he completely dismantled the $2M of subsequent improvements he had made to the marina, leaving the waterfront exactly as he found it: a bare parcel of land. Because of the litigation no one can build on it. Tom plans to retire to Florida and leave the land in legal limbo until he dies, as revenge or as sport–I could not tell which.

Tom described various other marine-based ventures including a service to impound and store fishing boats fallen into foreclosure. He made money coming and going on those contracts–being paid extensive storage fees due to the slow government process to sell the boats.

Tom lamented the lack of restaurant and private boat destinations on Boston Harbor, saying it was not a place a pleasure craft would frequent: “There’s no place to go. No place to dock and get a drink.” I saw the harbor with new eyes.

I asked Tom what a person in Fall River would say about him and he said, “They would call me a renegade.”

Greg here was too busy training Mike (below) to share his story.  It’s a good thing I asked for his photo before he got back to business.

The Trainer Greg with The Rookie Mike

Mike’s retired a couple of times. He spent 35 years in the fire department in Derry, NH, then went back to the police academy, and then spent three years as the harbor master in Kittery, Maine. This was his maiden voyage. He’s doing it because he loves being on the water and talking to folks. I didn’t chat them up too much as Greg was very diligent with his protégé, giving him step-by-step instructions all along the way. 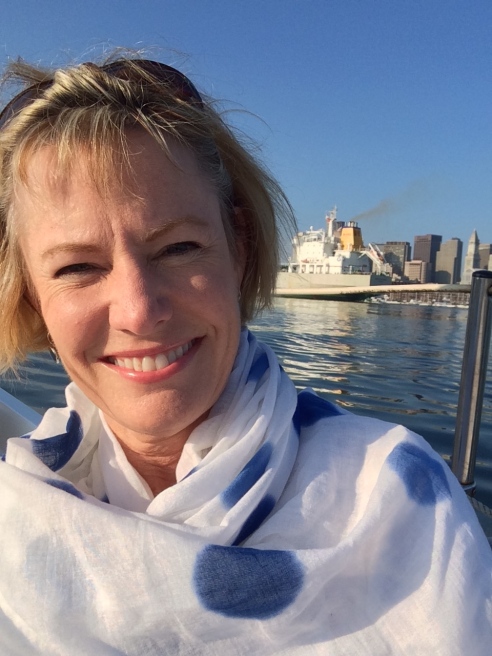 In my happy place

I’m not sure how being paid to be a water taxi captain counts as being “retired” but Kenny moved to this job after 12 years as a captain of an MBTA commuter boat. Kenny says it’s a relief to shed the stress of keeping a ferry running strictly on a commuter schedule. (When he said that, he had no idea how stressed I was feeling about his showing up 40 minutes after I called for a boat–I had been down on the dock since 6:30 AM and he arrived at 7:10–no fault of Kenny’s–the dispatcher dropped the ball.)

Kenny’s also captained a number of the Boston Harbor Islands boats, including the whale watch one I boarded for a Mother’s Day treat in 2015. I asked his favorite assignment and he said it is the camping islands boat:  he runs a circuit between the four camp-able harbor islands and Kenny likes staying out on the open water all day.

May 2015: the first mother/calf sighting of the season. Pallet is 25 years old and this is her eighth baby.

Walking on Boston Harbor’s Spectacle Island with my son and husband, May 2011. It was the day before my boy headed out for a cross-country bicycle trip from Charleston, SC to Santa Cruz, CA. He made it. He stayed in CA ever since.

I asked if there were every any stupid camper disasters but he said most of the participants are seasoned outdoors people. The only exception? …the Boy Scouts. He says there are always a lot of scouts who carry their gear gathered up in a big messy ball, in contrast to the others with trim backpacks. 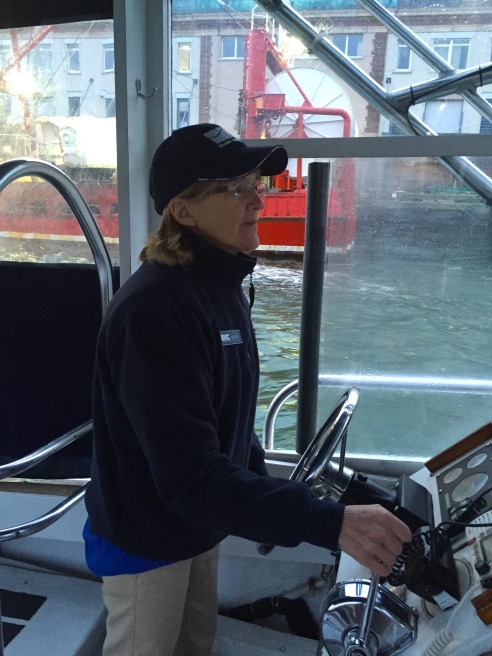 There are about 30 Boston Harbor captains. Four are women.

Kathy and I will have a bond forever: I was one of her training round passengers and at 6:30 AM today I was on her maiden solo voyage.  She acquitted herself admirably.

Kathy worked thirty years in the post office before she started managing a boat landing service in New Bedford (south of Boston). As such she has spent a great deal of time rowing skiffs but the water taxi is her first powered boat gig. She heard that Boston Harbor was looking to hire so she got her captain’s license at Northeast Maritime Institute. Kathy’s daughter Kelsey is in college so Kathy was looking for a year-round gig to help defray the college expenses. She revealed that a side benefit of her new venture was giving her daughter a great role model in perseverance: the captain’s license course was a real struggle.

Kathy prevailed but she said she comes from a seven kid family where every one of them is conscientious, hard-working and stubborn. Example: on her very first day of work Kathy memorized each of the (many) water taxi stops. When we pulled alongside a big red fishing boat (you can see it in the photo of Kathy) she revealed her knowledge of its drag fishing workings–information she learned on the busy New Bedford harbor where 250 working boats a day traverse.

Kathy talked about how she spends her days off exploring Boston. Even though her hometown Fairhaven is within an hour of Boston, it is a world apart. I could tell from our conversation that Kathy is one of those insatiably curious life-long learner role models. How lucky for her daughter!

I originally kicked off this series with a solo post about Captain Al.  I plan to just keep adding to this post as I meet more characters on the high seas.

4 Responses to “The Captains of Boston Harbor”