Since moving to an apartment on Boston Harbor I start and end most business trips with a water taxi ride to and from the airport or train station. It’s actually quite comfortable, even in the current frozen tundra of Boston. Travelling as much as I do, I’ve met a dozen or so captains on these boats, including the youngest skipper and–I am guessing–the oldest, Captain Al, pictured below. 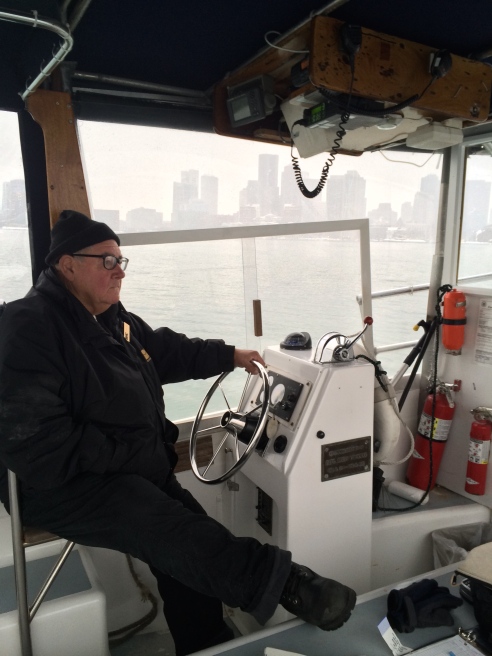 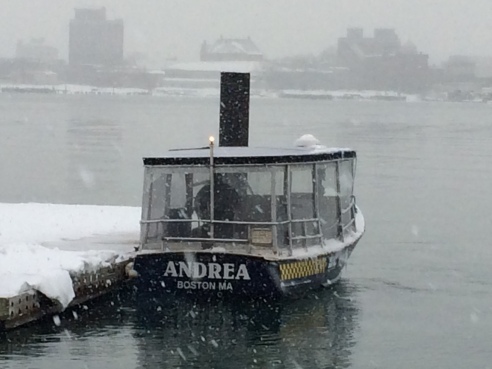 Al, pulling away from my apartment’s dock this week, into another snowfall.

Al has piloted all manner of watercraft on Boston Harbor since starting his career in 1958, at age 19. For example he’s captained tugboats hauling jet fuel from Maryland to Searsport, Maine. It was a trip that took two weeks onboard.  I was struck by how often Al mentioned the three daily hot meals served on the tug. I guess that would be one of the only distractions during that long time at sea. Al also owned a large passenger party boat for 38 years and says, “I only made money when the Tall Ships were in.” 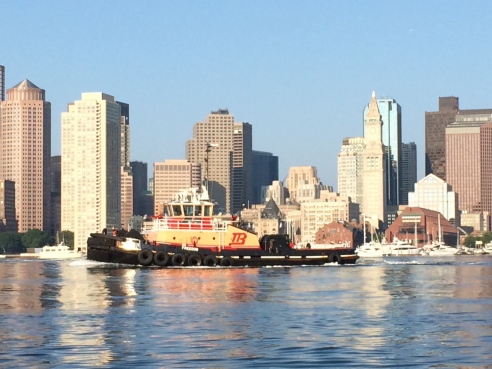 A Boston tugboat I snapped on an early summer morning, from the water taxi. 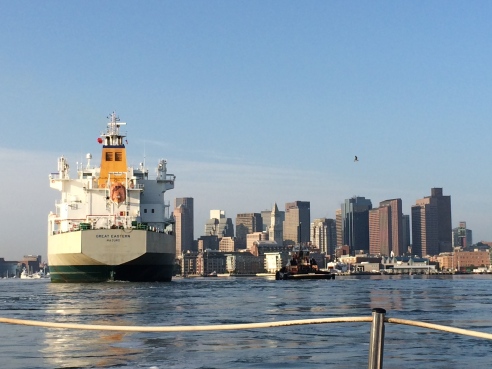 Another one doing its job, the same morning.

Al says he thoroughly enjoys the stress-free Boston Harbor Cruises water taxi job and that he “doesn’t miss the drunken people.” Al must have been a good advertisement for the life of a captain as one of his five children is also a tugboat captain. Looking at one of those hardworking craft from onboard the water taxi Al said, “When those guys show up for work they have no idea what they will be doing on any given day.” 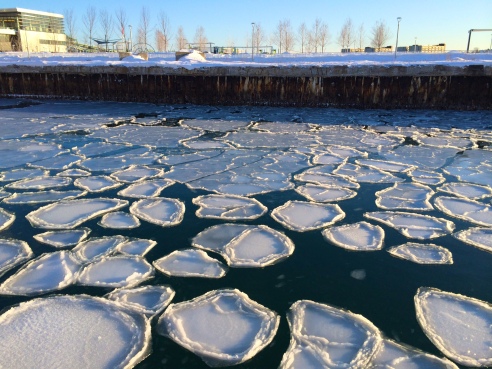 Toasty inside the water taxi, Al remarked on the “pancake” ice on the Harbor, saying he’d never seen it here before in his career. Given that this is the second coldest Boston February since record keeping began, his claim holds water. (Pun intended.) 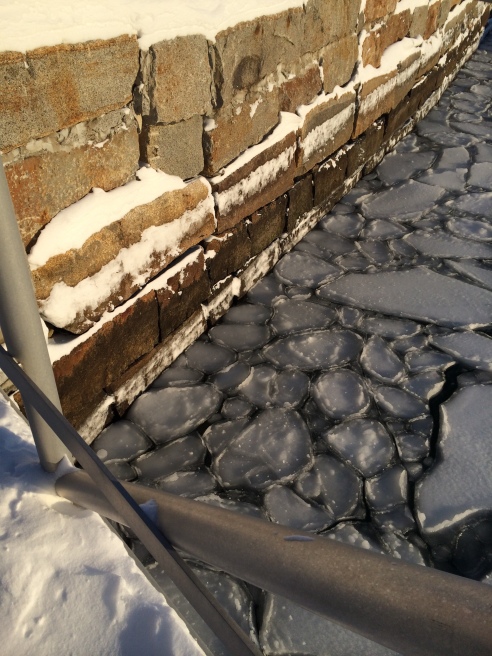 I thought I’d share a few more photos of this winter phenomenon, which is on track to be the snowiest winter—ever–in Boston. For perspective, in the last three weeks we accumulated more snow than Chicago has ever seen in an entire season. Ever. And at 96” of snowfall so far we are really not sure where we will put the additional dumping expected this week. Our narrow streets were never built for this. But they sure look as pretty as a postcard. 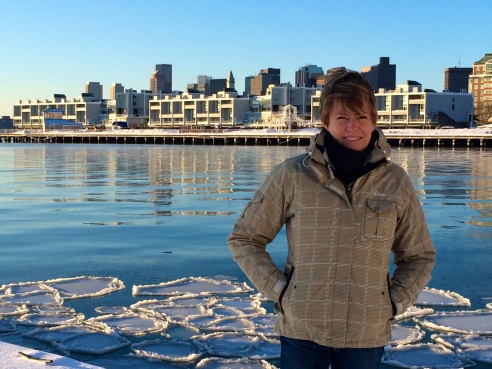 On the dock at my apartment building–not sure why the light looks so professionally staged–it was not! 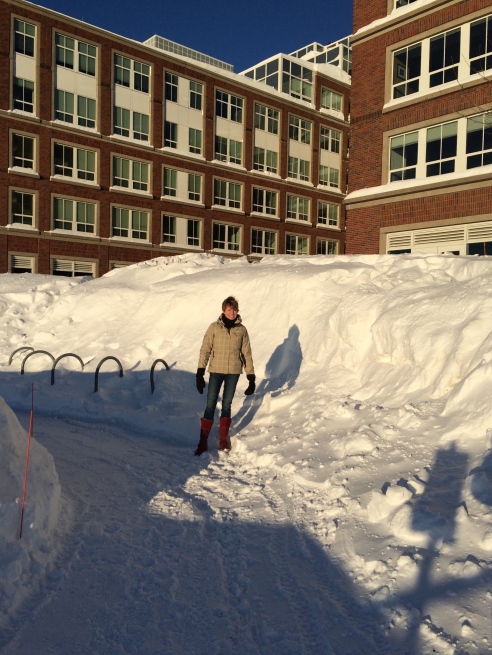 The banked piles of snow between my building and the harbor. Boston has created “snow farms” where the white stuff is hauled by graveyard shift crews, piling it up six and seven stories high and vainly trying to melt it with a couple of insufficient pieces of equipment borrowed from Northeastern University. 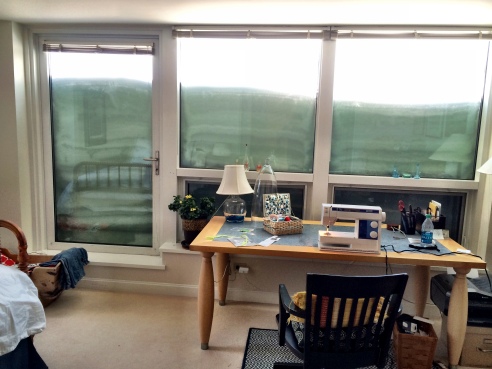 This is the view from my desk at home–where I have spent most of our five snow-closure days this year. I normally see the harbor. The pile of snow is now over my head and it is not a drift–it is a container-sized mass of snow that will be with me for the foreseeable future.

It’s hard to overstate the difficulty of keeping office operations open.  Most of our team takes the subway or bus and it has had unprecedented closure days.  Some of us park in our building’s lot but the spaces are about 1/3 covered with snow.  The balance of team members park on Somerville or Cambridge streets but there are absolutely no spaces cleared.  There are huge mounds lining our streets, each of which shrouds a buried car.  Fortunately, other than shoot Grommet videos, 95% of what we do can be handled from home. 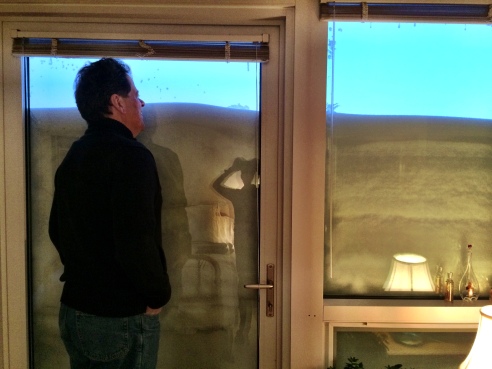 Another view, with my “ghost” in the background, and Des standing up on the door ledge to peer over.

Update:  the above photo went a bit viral when our son submitted to Barstool Sports–it was their top post for the day.  Then the Weather Channel asked permission to use it. 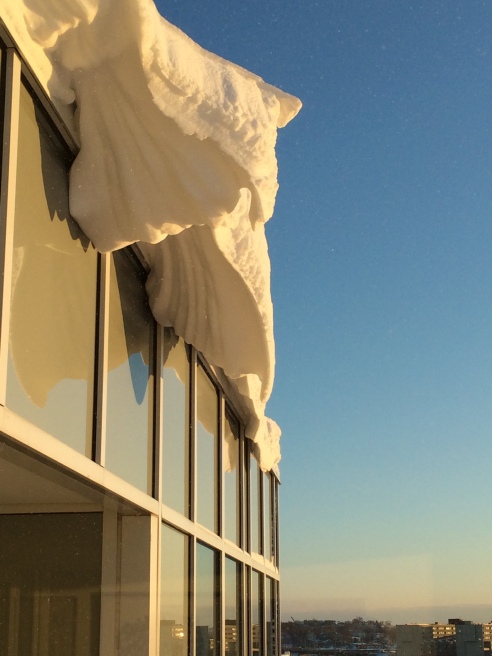 The Sydney Opera House of snow I see from another window. These are massive formations about 5′ tall, seven stories above sea level. 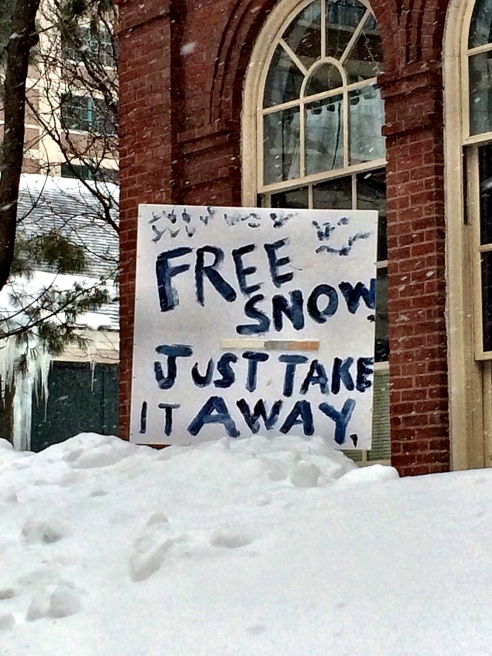 Across the street from our apartment building. We are wicked generous here in Boston.

Yes the streets look as pretty as a postcard, but I am glad I am not in a wheelchair, elderly, or pushing a stroller (I saw one mother getting all kinds of encouragement from strangers as she battled down Charles Street on Beacon Hill), or–worst of all–shovelling.

Underground parking is the best invention–EVAH. 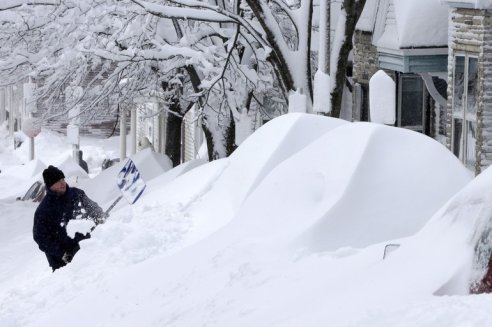 Update on 2-18:  I like this new map of our subway system.  Only underground trains are running for the next 30 days, and not that reliably.  I am going to go thank my team (again) for battling in to the office. 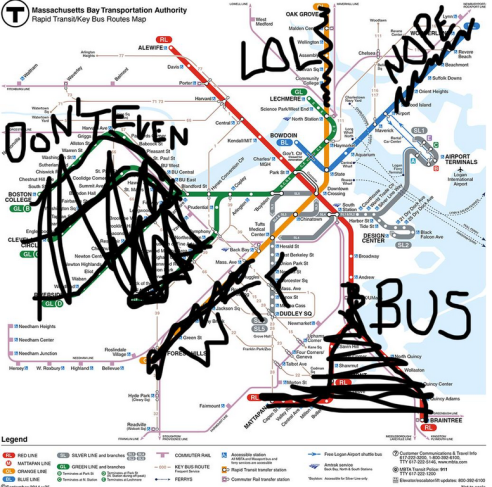 Some wag’s update to our subway map. Our company is on the Red Line and a two stop trip (normally 5-6 minutes) took two hours yesterday. So even that “open” line is not really that open.

Another couple updates on 2-20:

The maintenance guys in our building must have a sense of humor because they left me a “present” when they came to clear a trench between the windows and the wall of snow.  Yes indeed I have a snowman staring into my 7th floor bedroom. 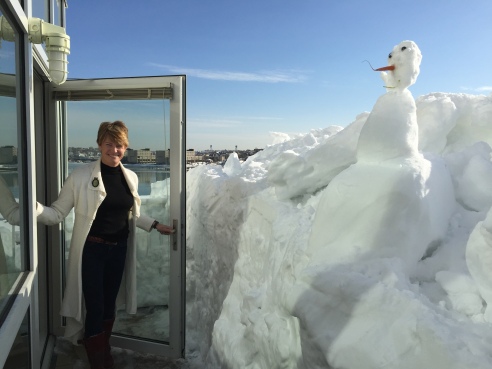