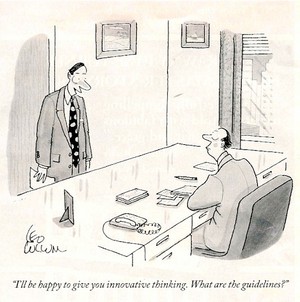 One of the coolest things about mentoring another person is that they often force you to new realizations and insights.  This happened to me recently when I had a meeting with a 19-year-old Harvard freshman named Sam Peinado.  We met at a talk given by Reid Hoffman (Founder of PayPal and LinkedIn).  The audience was largely students.  Sam caught my eye because he went toe to toe with Reid  during the Q and A, with insightful questions and even some push-backs on one of Reid’s answers.  I liked his mind, and I was amused by his feisty style.

Sam subsequently visited me at Grommet and asked a very original question.  “As a designer, and now start-up person, how do you come up with your ideas?”  He wasn’t asking about Daily Grommet, per se.  He was asking about my general process.

I hadn’t thought about that for a long time and I gave what felt like a very lame answer:  “Well I just observe a lot.  I’m very curious.  Then I try concepts out and start to look for, or create, data that supports these ideas.”  The student probed: “You are curious about what? Observe what? What kind of data?”

And I was forced to think harder:   “I read constantly–a mix of consumer and business publications.  I watch what urban kids say, what they do, what they wear–since they control many trends.  Same with moms, since they control the economy.   I look at cultural sentiments going mainstream–this used to be signalled mainly via print media, but now I watch that kind of stuff on Pinterest too.  Beyond general observations, I study new technologies.  I see patterns forming.  In a weird way, I often sense I am seeing the future.  I know what people are going to care about and I understand what is going to be possible to execute.”

But I also admitted that I don’t always know the optimum timing, and that is the hard part of committing to a breakthrough idea. 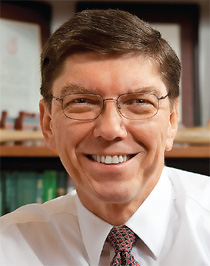 Anyway, I recently saw an interview with Clayton Christensen in my HBS alumni Bulletin where he answered the question “Can People Learn to be More Innovative?”  Short answer:  Some can.  Not all.  Christensen asserts that there are five discovery skills essential to innovation.  Here are some of his conclusions on how to be a good innovator:

“First and foremost, innovators are good at associational thinking, or simply associating. They make connections between seemingly unrelated problems and ideas and synthesize new ideas. I would frame associational thinking by asking this question: Has somebody else in the world solved a problem like this before? It turns out that most problems have been solved before by somebody in a different environment. Associating that other experience to what’s going on in my world may make me look brilliant, but in reality my brilliance was in seeing that this had been solved elsewhere.

Observing and questioning go hand in glove. Innovators observe things, then question why. If you want to be an innovative person, when you see things, you have to pay attention and then wonder why.

Networking is a skill that innovators use to identify and develop ideas by spending time with a diverse group of people with different backgrounds and experiences. By engaging with others, innovators increase the probability that they are going to gain useful insights.

Finally, innovators are constantly experimenting. The critical insight here is that for whatever reason, when God created the world, he made data only available about the past. As teachers at HBS, we’re trained to nail students to the wall if they ever make an assertion in class discussion that is not backed up with data and evidence in the case. So our students come out of here with this elevated respect for data-driven, fact-based, analytical decision-making.

The problem is that data are only available about the past. If you’re trying to be innovative, and you have this data-driven mindset, you can’t go forward. So experimenting essentially says, “I don’t want to wait until somebody provides data. I need to get out there and create data.”

So if student Sam is ever enterprising enough to meet Clayton Christensen, he can get this kind of stuff straight from the source.  The funny part is that academics like Christensen, and Jim Collins at Stanford, are excellent observers of creativity and leadership, but they completely deny having their own abilities in those areas.

So young Sam is still going to be stuck hanging around with less incisive and less articulate people like me, kind of like watching gorillas in the mist, and trying to figure out what makes them tick.

One Response to “Can People Learn to be More Innovative?”