Over the last three months I organized a lot of overdue home interior fix-ups.  Nothing truly major, yet this series of projects has had a surprising mood-lifting effect on me.  I used to come home every night to confront “death by a thousand cuts.”  No, not emotional trauma.  I was much more tortured by cracked bathroom tiles, and ice-damaged ceilings, and countless scuffs on our walls.  Now I come home to crisp, freshly-maintained rooms (as long as I ignore the day to day mess).  I can breathe!   But my husband is continually surprised at how openly happy I am about this work.  I mention it a lot. Like almost every night. And he must be thinking…”if I only knew the difference a gallon of paint could make.”

I suspect that these home improvements stimulate the production of the natural “contentment” chemical substance–oxytocin–for me. There is something about taking good care of my house (and my family by extension) that is mood-enhancing.  And I believe that the enormous numbers of women who report the calming, mood-lifting effect of Pinterest to be experiencing some version of the same oxytocin effect.

Why?  Take a look at a tiny snippet of my “Gardening” board on Pinterest, below, and an amateur deconstruction of my oxytocin theory, which depends on three key components of oxytocin production:  generosity, trust, and optimism:

Generosity: sharing a project doubles its pleasure.  In the first two photos I am pinning my spring garden.  Coincidentally, I do almost all my gardening in my front yard because I enjoy sharing it.  I am away from home most of the week and I like the notion that people are passing by appreciating it in my absence.  I feel generous and oddly connected to strangers, which is a documented oxytocin benefit. But now Pinterest enables me to share my garden with, literally, anyone with an internet connection, in a context that makes more sense than, say, Flickr, Facebook, or Instagram.   And I get a slice of that same enjoyment in looking at garden pins from other people.

Trust: Pinterest enables people to help each other.  In the third pin above, (the purple balls) I am sharing a photo of a garden sculpture I want to make.  I am having a little trouble copying what I found in this French garden, so I pinned the photo and asked for suggestions.  According to the neuroeconomist and TED talk-giver Paul J. Zak, I just produced an oxytocin moment for the people who follow me on Pinterest.  Apparently, one of the central ways to stimulate oxytocin is to give a sign of trust to another person.  Zak is publishing a book about it called The Trust Molecule.  It’s very low-demand, but putting this project up and asking for help enables other people to have that feeling of being trusted.  Odds are, I will follow their advice and probably even report back.  According to Zak, the mere act of sharing trust is a tiny step to creating a more stable society.

Pinterest is entirely optimistic.  Pinboards roughly divide into two categories.  One is “here is who I am.”  (Or at least the parts I am proud of, like my garden.)  The second is “here is who I am going to be.”  This second category is very interesting.  It is optimistic and future-facing. Pinning is like losing weight, cooking fabulous food, dressing beautifully, travelling to exotic places, and displaying great taste…with none of the actual effort.  This is who I will BE, and no one can argue with that.  In my case, I created an “Easter Projects” board full of the charming and obsessive things I would make IF I had time.  I am telling the world:

I am really am like THIS person, even though I don’t, um, actually have that life right now. But I would if I could, and I will some day.

And oddly, the mere act of pinning these projects, knowing full well I would never make them, gave me half the satisfaction of actually doing them.  And as proof (to myself) that these boards can someday be my reality, I used my “Need a new haircut” pinboard  to actually figure out a new hairdo. I made this board to show my hairdresser what I wanted, and to solicit input from a couple friends on my finalist choices.  So Pinterest can be concretely useful to organizing a project, which contributes to my optimism about the much more unrealistic boards I create.  (But for the life of me, I have no idea why 333 people decided to follow my haircut board.) 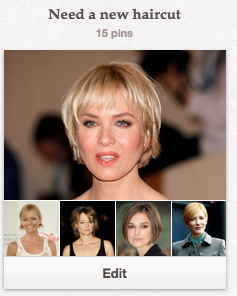 It’s a pretty rare and special thing for a bunch of pixels on a website to provide a consistently pleasant and personal experience.  The “oxytocin effect” of Pinterest is not dependent on delivering great new pins every day, or dumb humor, or exceptional stories.  I can look at my home page, find nothing of interest, but still wander over to fuss with  my own boards and feel…content.  I am tending my future.  (I have boards for trips I am actually planning, and trips I will never take.  Boards for house projects I am doing and houses I will never own. Boards for business ideas, meals, parties, inspirational people, gifts. Basically anything that I can capture online, visually, that I want to remember.)   And I probably spend a maximum of ten minutes a day on the site, so it is not as though it takes a lot of work.

Pinterest is the site that gives and does not take.  Clearly, being the fastest growing site in history, Pinterest is playing with more than pins and pixels.