Our COO Patti Purcell imported an interesting idea from her days as CEO of BodyShop.com   It’s called “Buddies.”  The purpose is to assign each new employee an experienced hand whose job is to speed up the team’s knowledge of the new person.    The vehicle:  an afternoon outing on the company’s dime.  The old hand Buddy picks the venue and then returns to the team with a presentation (in any form) about the new person.

Our new senior developer Anthony Deaver was the lucky guinea pig.  We went easy on him for what he joking called his “hazing”….we assigned affable Jen Lockwood to the task.    Here they are as they left the office: 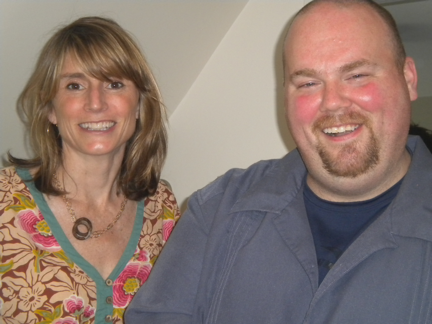 For a guy who says he “hates to talk about himself” Anthony was a very good sport.  It was hard to predict Jen’s choice of venue…the girl can span fashion shows, gritty urban dives,  and grueling mountain climbs.  Anthony must have worried about the girly end, especially because her office mates were urging her to take Anthony out “for a nice lunch” and some vaguely genteel pursuits.   Jen’s response:  “He’s a guy!  He’ll be bored stiff!”  Her brilliant choice for Anthony:  a tour of Sam Adams Brewery followed by a pub lunch at the venerable Doyle’s in one of Boston’s traditionally Irish neighborhoods.

Jen gave a multi-media presentation to all of us today.  Anthony clearly got over his shyness on the outing, as Jen had a dense paragraph of job titles to describe the huge variety of careers and hobbies pursued by “Deacon” Anthony.  My favorites were “carny” and “restaurant owner.”

I love this artsy shot of Anthony at the brewery.  I am guessing it occurred after a few taste tests:

Buddy Beta was a huge success.  We gave a lot of pity to poor Lara Simon, who is our next-up Buddy, and has a tough act to follow.