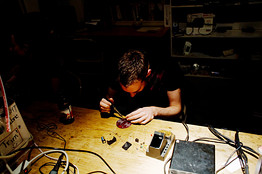 Photo by Alex Welsh for The Wall Street Journal ---Jason Euren, an anthropology student at the New School University in Manhattan, worked with a soldering kit at the Brooklyn hackerspace Resistor recently.

When we lived in Ireland, the secondary school system had a brilliant sophomore year program called “Transition Year.”  Tenth grade was only 50% academic.  The rest of the time, students took assessments for interests and aptitudes, did work internships, created philanthropic projects, started micro businesses, learned new skills like sailing, and generally got more broadly exposed to the world.  My son Dane discovered (or confirmed?) his academic and career interests.  His friend Cillian made a crucial personal discovery via two engineering and banking internships…he learned he absolutely hates office work.  He is now studying to be a nurse, and he loves it.

Thus I was happy to learn the stats in this new WSJ article, “Tinkering Makes a Comeback.”   Kids are starting to look for “real” professions that require creativity and perhaps some hands-on involvement.  Adults are too.  The ugly reality is that a lot of software development, financial analysis, consulting, and here-to-fore respected professional jobs are devolving into computer-tethered modern day versions of piecework.  Especially at the junior levels.

I’m not against those jobs.  Plenty of people have them and love them.  But they have been over-emphasized in our society as the most desirable options.  I am simply interested in exposing people (kids especially) to a broader definition of success and career ideas.  Anyway, here are some of the encouraging facts and statements from the “Tinkering” article:

I find this tinkering trend really encouraging.  (I am perhaps biased because I spent all my high school free time either flipping burgers or travelling between the wood shop, ceramics studio, and a giant weaving loom.  I think it made my mind fresher for learning iambic pentameter and Fortran.)    Kids will choose careers better suited to their interests.  The increasing affordability of tools to develop products (CNC machines, 3-D printers, laser cutters, CAD software) will continue to democratize innovation.  We see it every day at Grommet.  People who could never have been able to develop serious tech and engineered products twenty years ago, are doing it every day.  We can expect innovation to keep coming from unexpected corners.

Here what Naomi Lamoreaux, an economic historian at UCLA says:

The really dynamic times in our history are times when you have lots of ordinary people who think they have a chance to make a difference.

I have a front seat on that trend every day.   I am glad it is reaching college kids and the broader population.