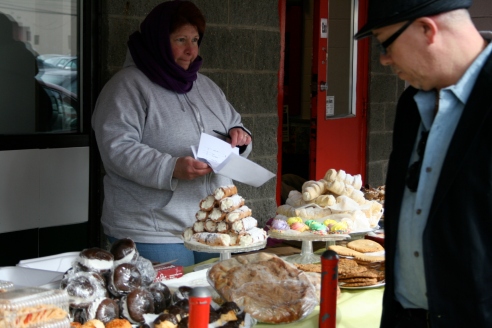 Cannoli fresh made at 7AM

I like being in places where things get made.  I grew up next to a humming Detroit Diesel Allison factory and freight train line.  Those noises and smells are instinctively comforting to me.  Pittsburgh is a city whose very existence has to do with making things.  I love this place.  I love the grit, the reincarnation of a Steel town, the humor, and these people who genuinely smile when they hold the door for you.

And as a designer, it’s pure visual delight.  So many graphic artifacts…vintage signs, quirky building textures.  Big bold bridge statements.  Coming from the airport, we always travel a route through Fort Pitt tunnel.  I never fail to gasp when we emerge…like I am looking at some kind of Dr. Seuss/Emerald City view of the city.

We took a tour of the Strip District.  It’s Foodie central, in a steeped-in-tradition kind of way.  150 year old sausage shops cheek by jowl with hipster places that make Biscotti.  Somehow the old ones never fell off their game, and the new ones work hard to look like they’ve always been there.

I took a bunch of pictures, mainly of signs, people, and food displays that charmed me. 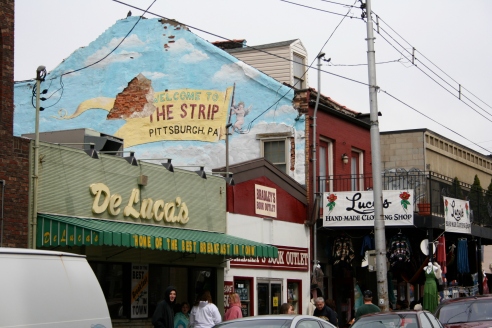 This is THE place to eat breakfast before trawling the food shops. Probably a good idea to fill your belly before starting that buying spree. Those $7 spent on scrambled eggs could save you $50 later in the day. 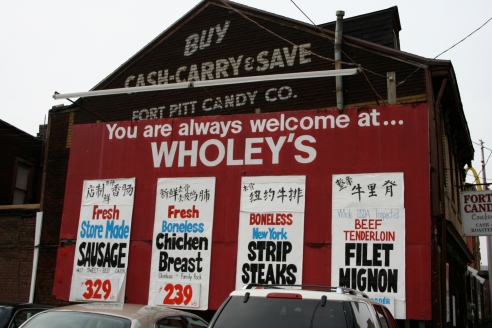 This family business was retail entertainment at its best. Mainly the product--its abundance, assortment, and in-your-face bargains on delectable stuff. Who knew, from the outside? 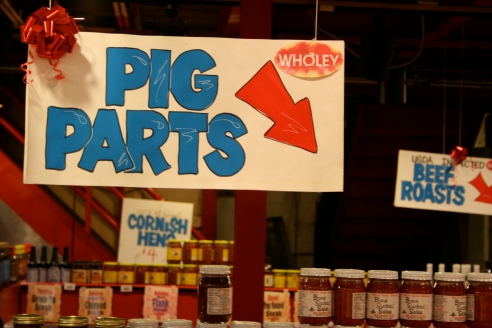 They seem to eat a LOT of pig in Pittsburgh 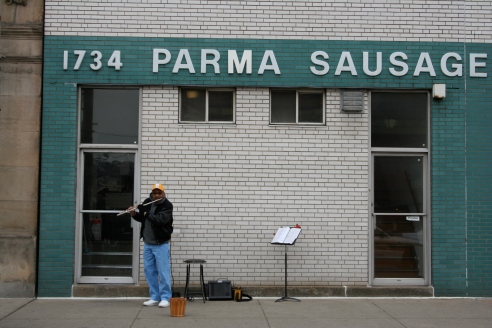 More pig, and plenty of customers inside too 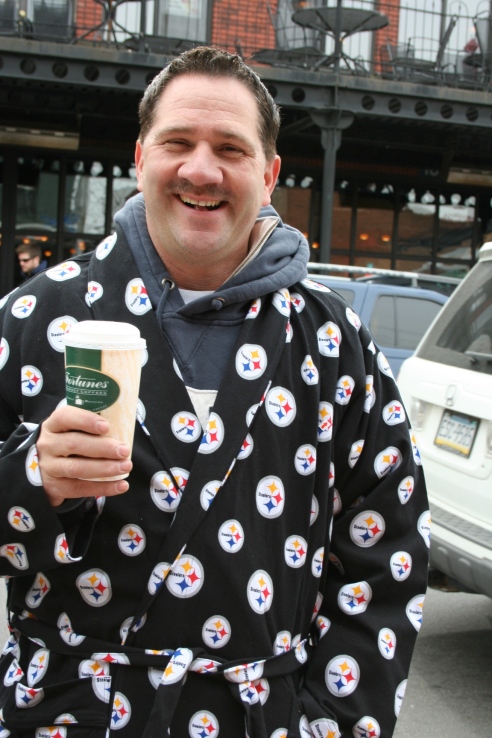 This street vendor guy was yelling "Sheet sets for ten bucks!" but it was his bed linen-ready apparel that caught my eye 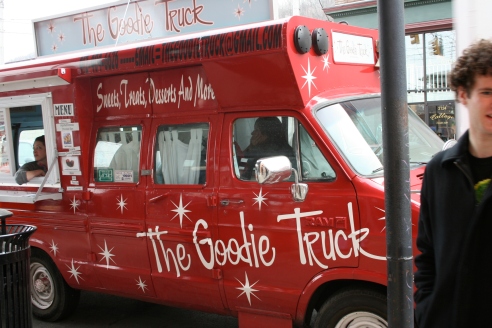 Vehicles get in on the action too 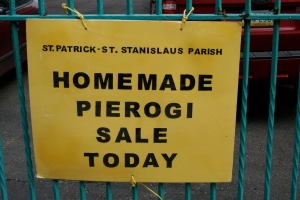 We went to the church holding the homemade Pierogi sale, in search of lunch. They were sold out. The ladies closing up shop looked just like my Aunt Bea, who used to fundraise for her own church by making Pierogi. A guy standing nearby noticed my disappointment at the sell-out and said, "There's a Polish deli around the corner with hot Pierogi. They're not nearly as good as ours, but they'll do the trick." 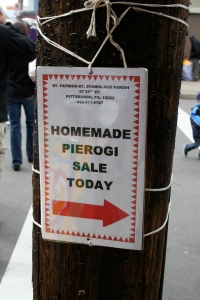 This was the sign that initially caught our eye, and sent us on a Pierogi hunt. Never mind that we had already had Pierogi the night before. When in Pittsburgh... 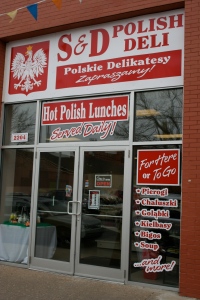 Here's the deli where we found our joy 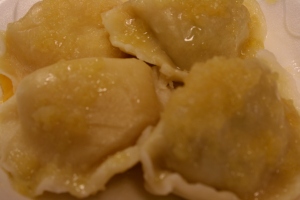 My lunch. On the left, two cheddar cheese and potato Pierogi, on the right two mushroom and sauerkraut. Not sure what sauce goes on them. Butter and onion? A cute boy of around ten sold them to me, instructing his Polish-speaking father about our order. 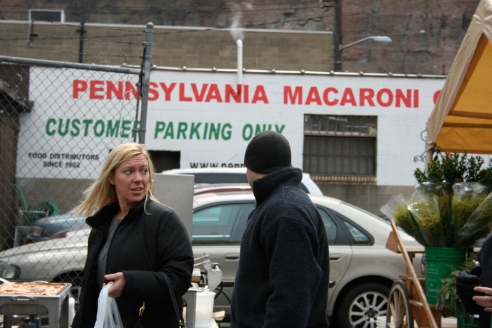 Looks like nothing special right? Maybe a factory. Wait'll you get inside. 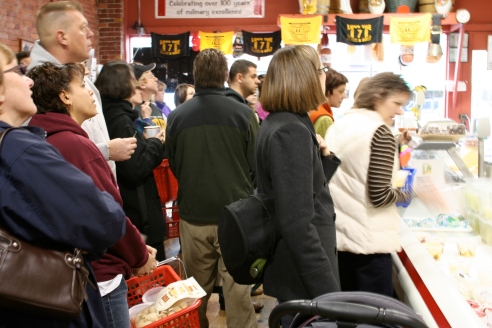 People were lined up five-deep, patiently waiting for their number to be called...just to buy cheese. (They had plenty of pasta too.) At this moment they were working on Customer #42 and I would have had to take #85 to start waiting my turn. 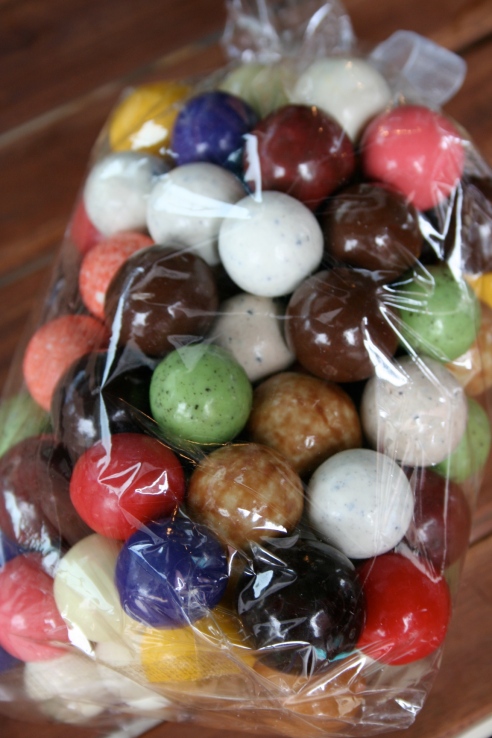 My fantasy in a bag. I love marbles. I love malted milk balls. How about a sixteen-flavor, fresh-made combo bag of this confection? Turns out, in reality, that malted milk balls in flavors like Lemon, "Ultimate", Neopolitan, and Blueberry look much better than they taste. I can't believe I bought such a big bag. 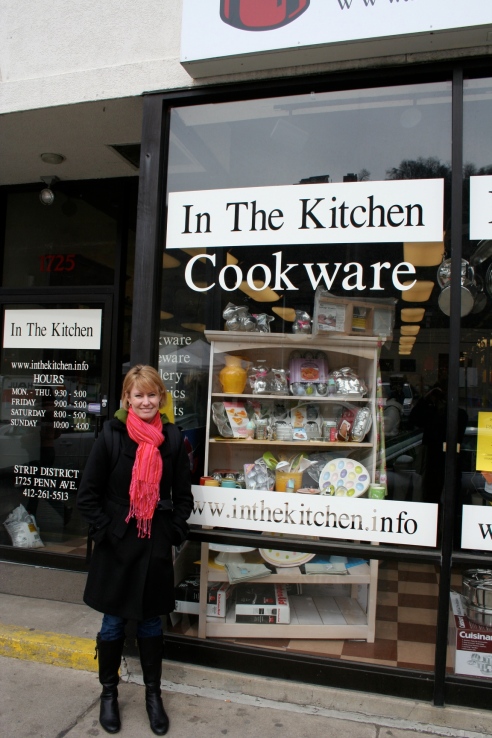 I found a couple good possible Grommets in here, I think. Only wish I had brought the Flip video camera with me to tape the lady in the store who told me all about the latest and greatest kitchen tools. They had a 150 foot long wall of terrific gadgets. 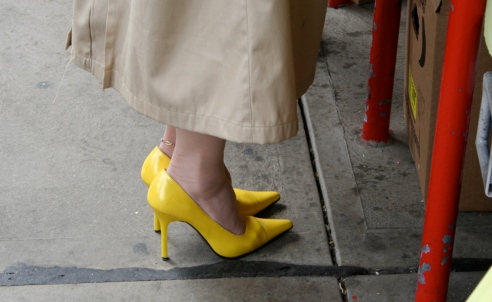 The customers visiting the Strip were as interesting as the food. I stalked this 65-year-old-looking lady until I could discretely shoot her screaming yellow pumps. I loved her for wearing them. Especially because she looked totally innocuous from the ankles up. But I loved her even more when I went to crop this photo and noticed that she is sporting an....ankle bracelet. 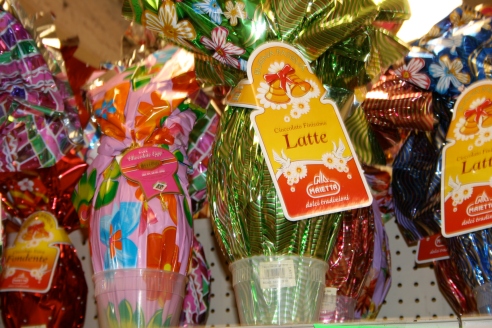 These giant Italian Easter treats reminded me of an Irish tradition I had forgotten. Instead of assembling Easter baskets from random components, the Irish Easter Bunny gives kids an "Easter Egg." It looks kind of like this, but is usually composed of a big brightly colored box full of the child's favorite variety of chocolate. So Cadbury's or Malteasers or Aero or Bounty. Pretty light work for the Easter Bunny, and for the child--you don't miss a basket if never had one. 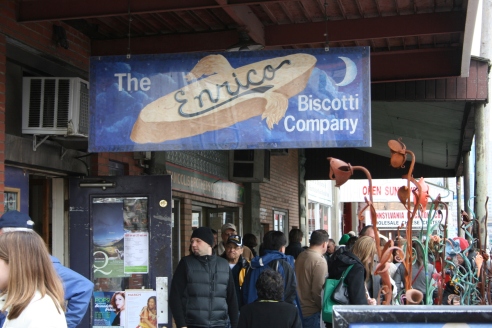 What do you think? Is this place old, or new? I'm goin' with new, but the huge, local Italian factor could prove me wrong. Maybe people in Pittsburgh have always needed lots of Biscotti. I probably had my first biscotti at age 25, so what do I know? 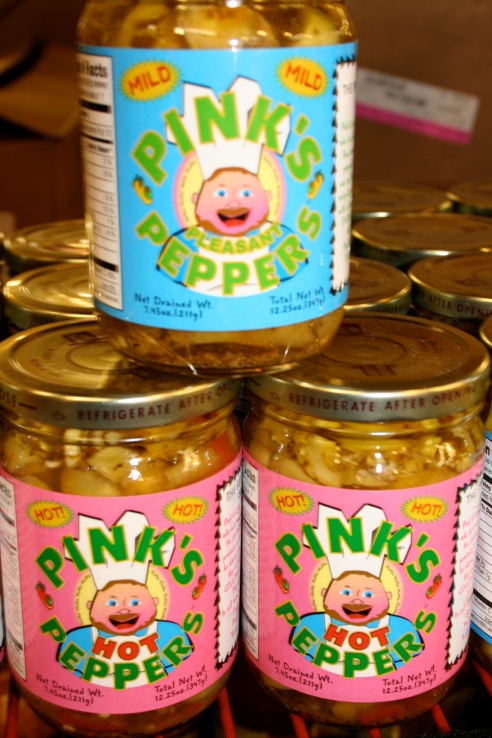 This might be a Grommet, eventually. Our audience is probably too small to handle a very regional and quirky hot pepper producer, but someday I think we will reach enough people to be able to do very, very niche products like this. And I love the labels. I would not want to eat the peppers, but rather I would be inclined to display them. 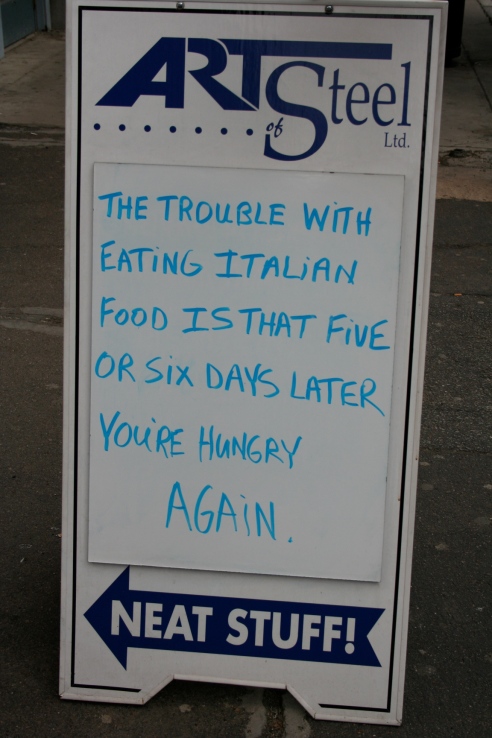 Italian food was the backbone to the Strip district offerings 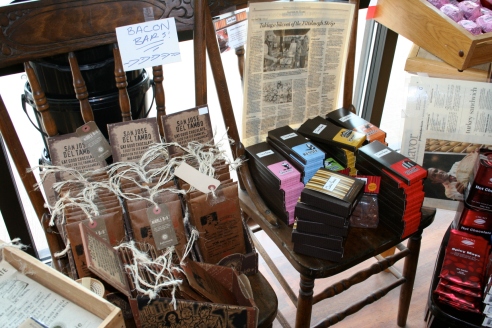 I thought this was a very pretty display, in the chi-chi chocolate shop where I bought my fatal malted milk balls. But boy, did they know their merchandise. I bet if I had asked about those malted milk balls first, they would have given me the straight scoop. Or, better yet, let me try one. I might have still bought them for the visual treat...but a much smaller bag. 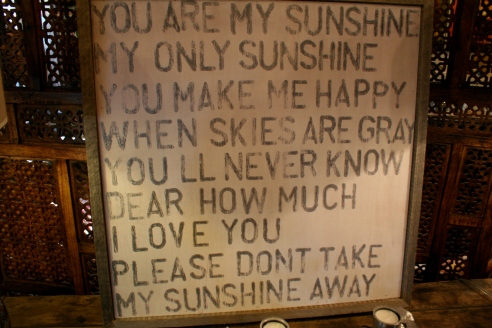 I had to laugh when I saw these song lyrics. I rarely sing to my boys...I cannot hold a note. But I used to sing this song, terribly, and with an emphasis on "you'll never know how much I love you." I delivered it like a pitiful accusation and it always seemed to make them laugh. I asked my son if he remembered that tradition...he did not. Oh well. Some things you do as a parent, you do for the general family vibe, no?

Finally, I am so excited I tamed my digital camera.  Until today I could never seem to focus.  Every shot looked blurry to me.  Uh, doh.  My son showed me a special little dial near the viewfinder, specifically made to adjust for my failing eyesight.  Although I am not thrilled to need a senior-citizen accommodation, I am delighted to finally put this piece of gear to good use.

7 Responses to “Places where things get made; Pittsburgh”