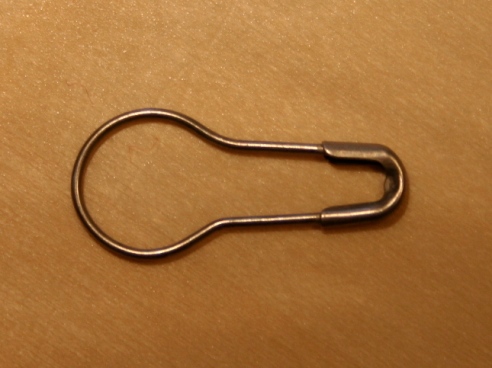 Just curious.  Since when has this newfangled safety pin been in existence?  I first noticed one in early December, on a sweater made in Italy.  I chalked it up as a new European gizmo.  But then last week I saw one pinned onto a piece of American apparel at the mall.

They’re really elegant for holding clothing tags.  The lack of a “loop-dee-loo” at the bottom keeps the string free and clear. And I like the form.  It’s the Absolut bottle of fasteners.

Beyond that, we can all appreciate any device that prevents the use of that annoying plastic tag holder.   The type the store staff shoots into the fabric seam with a gun.  You get home and cut it off (lately they are made thinner and breakable, I’ve noticed, which is an improvement over searching for scissors.)   Invariably, one end goes flying and stays forever resident in your bathroom tile grout.  The other end burrows into a garment  seam and repeatedly irritates your skin. 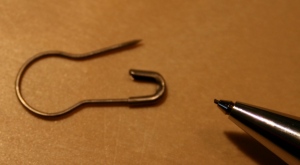 To give a sense of scale...that is a normal mechanical pencil next to it.

But…back to this new safety pin design.  I usually notice new little objects of good utility.  Especially humble ones.  Really wonder if “everyone” else already knows these safety pins, and how long they’ve been around.

14 Responses to “How long has this newfangled safety pin been around?”