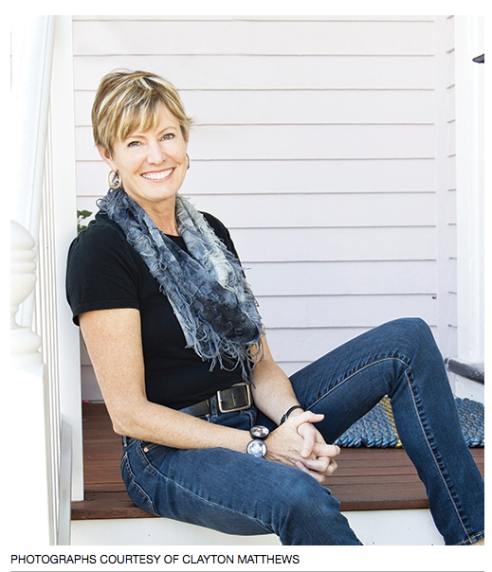 DBusiness recently published a story about my growing up in Detroit and winding my way to being a company founder. The reporter, Tom Murray, did a fine job and got me talking about stuff that doesn’t usually come up. I liked his focus on the city and what it meant–and means–to me.

I was really surprised at his sourcing some photos from my high school yearbook–they made my kids laugh.

I am reproducing the article in its entirety here.

The turning point for Jules Pieri in a life that was already remarkable came in the mid-1990s, when she was working on product and brand strategy at Playskool, a Rhode Island-based company that produces educational toys and games for children.

“I saw that the best product ideas didn’t make it to market,” Pieri says, “and I asked my boss, Meg Whitman — who later became famous, but she wasn’t then —‘What’s going on?’ She said, ‘If Target, Kmart, Walmart, and Toys R Us didn’t want it, it wouldn’t get made.’ That was the way of the world with big box retail. It made me really angry. And being angry is a really good catalyst for me.”

That epiphany inspired Pieri and a partner to create a startup they called The Grommet. Launched in 2008, the Boston-based company is a discovery platform that helps worthy but unknown products succeed, largely by utilizing social media to empower creators, inventors, and entrepreneurs.

“Instead of four retail buyers in the world having all the power for toys,” Pieri says, “we thought, Why not organize a community that can do that, so David can have some chance against Goliath? The thing these little enterprises struggle with is (cracking) what they think is the hard problem, the product. But then they hit the harder problem, which is (that) nobody cares yet because nobody knows about you. They don’t have the resources to change that, and most of them die on the vine. They need to basically cut two years of pain and suffering out of their life cycle, and that’s what we can do.”

The formula has been wildly successful; since 2008, more than 2,000 innovative products have been launched, among them such household brand names as FitBit, Otterbox, and SodaStream. To date, thegrommet.com has received some 260 million views and has a community of more than 2.7 million email subscribers and followers. With numbers like that, it’s no surprise the company has grown 900 percent in the past two years.

Not bad for a woman who proudly boasts of a life journey that began on Detroit’s west side, on the other side of the tracks — literally.

“There were tracks for a freight line and there was a GM diesel plant at the end of the street I grew up on — Appleton Street in Castle Rouge, next to Brightmoor,” Pieri says. “But there was no castle, and not even a red house in the neighborhood at the intersection of what used tobe Schoolcraft and Telegraph. Now it’s I-96 and Telegraph.”

Her mom was a bank teller, her dad a tool maker, and virtually everyone else on Appleton Street was involved in some aspect of manufacturing — tinkering, making, or fixing an array of products. The relentless hum of activity in the diesel plant provided a daily soundtrack for it all.

Pieri attended Murphy Junior High (now Murphy Performance Academy) at Five Mile and Telegraph, where her innate intelligence, curiosity, and perseverance, along with a rebellious streak, quickly enabled her to stand out.

“I’ll never forget this one teacher telling my parents, ‘Let her breathe, let her do what she needs to do; she’s a real exceptional student,’ ” Pieri says.

When the time came for Pieri to move on to high school, another teacher urged her to consider a private school, like Cranbrook
Kingswood in Bloomfield Hills.

“It was kind of terrifying,” she says, “because it wasn’t my parents’ choice. I snuck behind their back to get the application in. They were aiming toward me being a solid citizen with good character, and their experience didn’t include college because they were afraid my values would change or not relate to what they valued.”

Her parents eventually came around. At 14 years old, Pieri not only got into Kingswood, but she earned a scholarship as a boarding student. “I’ve got this quote hanging on the wall in my office by Adm. Grace Hopper,” she says. “It says ‘It’s better to beg for forgiveness than ask permission.’ That’s kinda how I’ve led my life.”

Pieri’s focus at Kingswood was on academics as well as fine arts — “hours and hours of weaving,” she says. She graduated fourth in her class and arrived at the University of Michigan thinking she’d avoid what she calls her “art class diet” and focus on traditional studies. 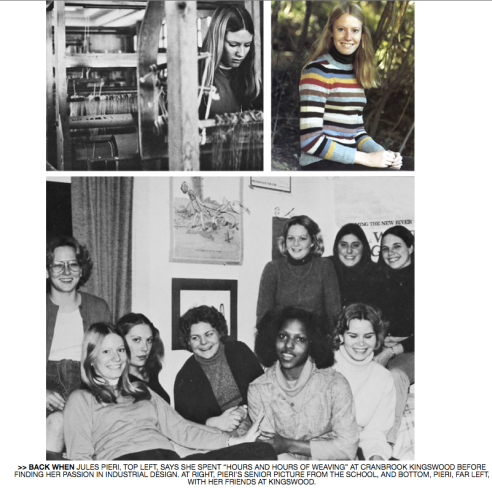 “But I missed (art), so I took a sculpture class. I discovered industrial design when I was walking down the hall one day at the design school and there were these student projects, and it kinda stopped me in my tracks. What is that? How do I get to do that? I could see a career in front of my eyes — and then I had to figure it out, because I had to do that.”

She ended up with a double major in graphic and industrial design, and then became the first designer to graduate from Harvard Business School. While all her classmates headed for careers on Wall Street, in Washington, D.C., or in Hollywood, Pieri was the only one to join a startup — in this case, Continuum, a global design and innovation consultancy.

“I was the first designer to get an MBA,” she says. “It wasn’t a thing or popular at the time to work for a startup. Now I almost have to talk students off the ledge from feeling bad if they don’t join a startup.”

Pieri’s stint at Continuum began an eclectic job odyssey covering 20-plus years; much of it was spent working closely with Whitman in three separate product development jobs. “My whole career plan was just following her for a few years,” she says. “Except eBay, duh!”

By 2006, following a four-year adventure with her husband and three sons in Dublin, Ireland, Pieri embarked on her second startup as president at Ziggs Inc., an early competitor of LinkedIn.

It was simply a natural progression from the first bold step she took as a bright 14-year-old in junior high,